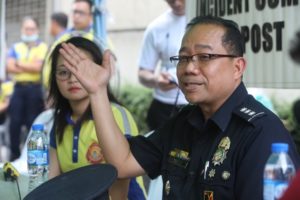 The Cebu City Bureau of Fire Protection (BFP) will intensify its inspections of establishments in the city to ensure compliance with safety standards.

This comes at the heels of the fire that hit Metro Ayala last week.

With the ongoing renewal of business permits in the city, Chief Insp. Noel Nelson Ababon of the BFP said premises and buildings of establishments that have safety issues must be carefully inspected before they can renew or apply for a business permit.

A fire inspection certificate is one of the requirements for the issuance of a business permit.

“Since renewal of business permits karon, kuyog man nako ang akoang chief sa fire safety sa enforcement section, ang instructions ra gyud ana, intensify the inspections, implement what is needed (Since it’s the renewal of business permits, we have instructed the chief of fire safety in the enforcement section to intensify the inspections and implement what is needed),” Ababon told the reporters.

Ababon and other BFP officials met with Cebu City Mayor Tomas Osmeña yesterday to discuss the existing equipment and gear of firefighters and building safety measures.

“Sa pagkakaron, ako lang siyang giingan nga ako pang gi-inventory ang tanang mga equipment sa Cebu City especially during fire operations man gud duna mi nakit-an nga mga problema” (I told the mayor that I still have to go make an inventory of all the equipment in our stations. We have seen some problems especially during fire operations), he said.

He said he would only request for support after the inventory of the status of their equipment. He said the mayor assured him of support from the city through the City Disaster Risk Reduction and Management Office (DRRMO).

Ababon said he was instructed to finish the inventory by Friday.

Meanwhile, Osmeña said they will ask technical assistance from the sister cities of Cebu City, especially in training on fire safety.

“We have to get to the bottom of why the sprinklers did not work. That’s the central issue. This has to be studied then we have to hire external consultants for that, we will do so and we are asking technical assistance from our sister cities to train our personnel,” Osmeña said during his press conference yesterday.

The mayor said the city will purchase additional breathing apparatus and will install a device that will refill the oxygen tanks of the disaster response team.

“You see when you run out of oxygen you don’t want to send it back to the hardware to fill it up with oxygen. So we’re going to try to put it in a truck.

We’ll convert one of our ambulances so in the next fire, when the tank runs out of oxygen, it can be refilled right there on the spot,” the Mayor added.

In the event of a residential fire, which also concerns people living in high-rise buildings, the mayor instructed the fire department to prepare tarpaulins indicating contact numbers from the response team.

“Everyone has a cell phone I presume. This is just thinking ahead. Call this number then we can talk, then we can find out where are you, what route to take to escape,” he said.

“We have to think of more contingencies like this. We have to ask questions like what happens when the generator sets don’t work. If the sprinklers were working in that building the fire would have been extinguished in fifteen minutes. It took three days. Those are very serious questions and its back to back with the Davao fire,” Mayor Osmeña said.

Meanwhile the BFP was commended by the Department of Interior and Local Government (DILG) for successfully putting out the fire in Metro Ayala without any casualties.

At the same time, he announced that President Rodrigo Duterte had approved the purchase of firefighting equipment for the BFP worth P1 billion.

(It is very heartwarming that they see the efforts of our firemen. We are just doing our duty and ensure that no life will be put at risk.)

Fire investigators are still questioning mall and Metro Ayala employees regarding the fire. Tadeo said an investigator from the BFP headquarters may come next week to help with the investigation.

He also reminded the management of Metro Gaisano and Ayala Mall to immediately remove the cooling tower that has tilted towards the inner area of the mall which could cause damage if it collapses.

The Metro Ayala building cannot yet be demolished until the BFP gives its clearance.

Jeanette Japzon, corporate communications manager of Cebu Holdings Inc., said the adjacent Ayala Center Cebu will remain closed while they make sure that the structure is safe for the public to enter.

“The Bureau of Fire Protection recommended that the damaged portion of the Metro Department Store building, which is right beside the building of the main mall, will have to be dismantled and removed before we open,” she said in a statement.

“As safety is our primary consideration, the mall will remain closed until further notice. We ask for your continued patience and understanding,” she added. /With a report from Ador Vincent S. Mayol

Read Next
Radaza to businesses: Comply with safety requirements