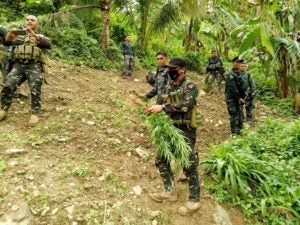 Anti-drug operatives have uncovered a marijuana plantation in a hinterland village of Balamban town, 63 kilometers west of Cebu City, and arrested six planters caught during a raid at the plantation on Wednesday.

A total of 9,451 marijuana plants with an estimated value of P1.8 million were uprooted by the operatives, said Chief Inspector Janette Rafter, the chief of the Balamban police.

A report from the Balamban police said the plantation, located in Sitio Bagakay, Barangay Arpili, Balamban, was raided at 5:30 a.m. on Wednesday by a joint team of operatives from the Cebu Provincial Police Office (CPPO), Philippine Drug Enforcement Agency in Central Visayas (PDEA 7), Armed Forces of the Philippines (AFP) and the local police.

The six persons nabbed at the site during the operation all belonged to the same family and were identified as Wilson Sigue, 43; Toto Sigue, 66; Armando Sigue, legal age; Timoteo Sigue, 65; John Roberts Sigue, 19; and Marriel Sigue, 28. They are now in the custody PDEA 7.