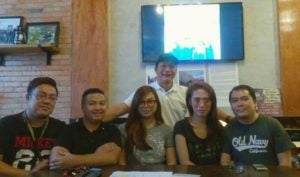 Runners are expected to take the spotlight in the upcoming Cebu Marathon 2018 this Sunday.

But a group of Cebuano lesbian, gay, bisexual and transgender (LGBT) individuals may share the spotlight as they volunteered to man one of the 26 hydration stations along the race route of this annual prestigious race.

A total of 5,081 runners will be joining the race that features 42-kilometer, 21k, 10k and 5k distances. The stage area is at the Sumilon Road at the Cebu Business Park.

The LGBT group will be assigned to the 35th-kilometer hydration station located along S. Osmeña Boulevard at the back of the Cebu Technological University (CTU)-Main Campus. It will be named the “Panday Station” after Cebu City Councilor Joel Garganera’s “Panday Cafe” at his office at the Cebu City Hall.

Garganera, a vocal supporter of the LGBT community and an accomplished marathoner, was responsible for putting members of LGBT groups Repos Agib and Kembotitas at the hydration station in that area of Barangay Tinago, which he used to lead as former barangay captain.

“What makes this (hydration station) unique is that we will not just provide music and cheers to the runners passing by, but we will also make sure that they will feel the Sinulog atmosphere. We will pamper them by giving them free massage, free food. We will make sure that each runner who passes by our hydration station will have fun,” Garganera told Cebu Daily News.

Around 4,000 runners in the 42k and 21k distances are expected to pass in that station.

“We will make sure that we will bring fun and entertainment to the runners at our hydration station,” said one of Repos Agib’s members Junel Echavez, who is one of Garganera’s staff in Cebu City Hall.

The group will have 50 members deployed at the Panday Station.

“We will provide them the much needed energy to push themselves to finish the race,” said Echavez.

The group said some of its members will be dancing to the beat of the Sinulog while some will be wearing colorful costumes to entertain runners.

Repos Agib is founded by Johanne Saludes, the president of the organization. Repos Agib has several barangay-based chapters such as the Kembotitas for Barangay Tinago.

Aside from doing charitable activities such as providing school supplies in remote barangays of Cebu City and conducting feeding programs to densely populated barangays, the group also reaches out to other LGBT members who need counseling.

Next year, Garganera said he plans to let LGBT members join the fun run. They will start to train this year.

Read Next
Bowlers from different clubs to join Sinulog Open