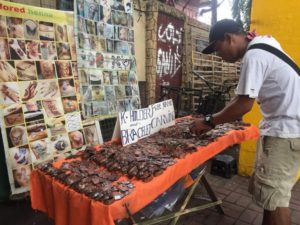 Key holders, nameplates, bracelets, t-shirts, and festival masks are common in souvenir shops during Sinulog; but it is a row of handmade ceramic items that is catching the attention of passersby in a Sinulog bazaar along Osmeña Boulevard.

Villajos has been selling souvenirs for eight years; but it was only four months ago when he started to make bracelets and keychains out of clay to make his items stand out from the rest.

When I finally learned, I decided that I could make this my business),” he said.

As customers begin to flock Sinulog bazaars during the week, Villajos prepared around 1,000 pieces of ceramic-made bracelets and key holders.
In a day, Villajos can make around 100 pieces of key holders and 60 to 80 bracelets.

The key holders bear an image of Sto. Niño; while phrases like “I love Sto. Niño” and “I love Cebu” are etched on the bracelets.

According to Villajos, unlike other souvenir makers who use an ordinary needle and a blackening shampoo to personalize items, he uses a mini-drill to carve out letters on the surface of his ceramic-made items. The process takes nearly half an hour to complete.

To shape the keychains into a perfect rectangle, Villajos uses empty matchboxes as molder. Each bracelet or key holder sells at P20.

Villajos is a single parent to his two kids, aged 3 and 5, who were left to the care of his parents in Aloguinsan, southwest Cebu, after he broke up with his wife.

Away from his children most of the time, Villajos said he never fails to ask the Sto. Niño to watch over them while he is out earning a living.

Since souvenir items are seasonal, Villajos travels to different parts of the country to sell his items during festivals and big sports events.“Mapul-an man ang mga tawo dayon ani, halinon ra gyud ni sya kung naay pista unya naay ingon ani nga dagkong events. Mao na nga one week or duha ka semana ra ko sa usa ka lugar or event. Balhin na pud sa laing lugar (People easily get tired of these, so I move from place to place wherever there is a fiesta or big event. I give each place one to two weeks before I move to another place),” Villajos said.

Despite the presence of many other souvenir shops in the city, he manages to earn enough each day.

Aside from tourists and students, Villajos said several people buy in bulk from him.

Villajos considers himself lucky for being the only one, for now, to sell ceramic hand-carved Sinulog souvenirs.

He is also happy for the chance to showcase his creativity and entrepreneurial skills while also promoting the culture and history of Cebu.