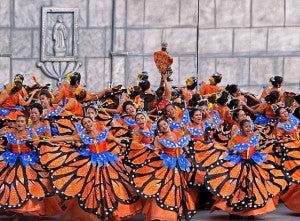 The winner of last year’s Sinulog Based (SB) and Free Interpretation (FI) categories won’t defend their titles this year.

But the Sinanduloy Cultural Troupe of Tangub City will still be featured as a guest performer in this year’s parade and presentation.

Ricky Ballesteros, executive director of the Sinulog Foundation Inc. (SFI), said the Tangub contingent is celebrating their 25th anniversary this year and thus opted not to compete this year.

“But they will be making a comeback next year,” he said. Lanao del Norte, the Land of Beauty and Bounty that won the 2017 FI category will also skip this year’s competition.

But Lanao is sending a float entry in today’s grand parade.

Despite the absence of the two defending champions, Ballesteros said today’s 38th grand parade will still be fun-filled.

As of last Friday, about 116 contingents signed up for the grand parade. This year’s participants are nine more than last year’s number.

This year’s list included the guest contingent from the Cebu City government, Tribu Sinanduloy of Tangub City and the Cebu provincial government that will be opening this year’s grand parade.

Ballesteros said Tribu Buyoganon of Abuyog town, Leyte Province and Tribu Kandayan of Daanbantayan town, northern Cebu are an added attraction since they were absent for two years.

Msgr. Roberto Alesna, parish priest of the Archdiocesan Shrine of St. Therese of the Child Jesus in Lahug, Cebu City will officiate the 8 a.m. Mass at the Cebu City Sports Center.

The street dancing will start after the mass at 9 a.m., Ballesteros said.

But the grand parade route will be closed at 5 a.m. to allow contingents to assemble along the New Imus Road.

Participants will dance along the 5.3 kilometer route from the New Imus Road, Mango Avenue, Osmeña Boulevard, R. Landon Street to the Cebu City Sports Center (CCSC)grandstand stage, where final judging will be held.

The street dancing had been shortened by nearly one kilometer in the past two years in comparison with the Sinulog’s carousel route that is 6.1 kilometers long.

Ballesteros said a shorter parade route is easier to manage and will allow street dancing to end before nighttime, when the crowd of spectators normally start to become rowdy.

Osmeña said violators will pay fines and face revocation of their business permits. Ballesteros said organizers will make sure that the Sinulog will remain fun despite the mayor’s restrictions.

The Basakanons won second place in the Sinulog sa Barangay competition held on January 14 when they performed a dance which also won them third place in the 2017 Wonju Dynamic Dancing Carnival held in South Korea.

“Basakanons will be performing a different routine in Sunday’s Sinulog,” Ballesteros said.

Marla Alforque, the 2017 Sinulog Festival Queen and Reyna ng Aliwan, will lead nearly 300 university dancers during the grand finale that will be staged at the CCSC grand stand at 5 p.m.

Alforque was lead dancer of the Carcar City contingent in the 2017 grand parade.

Ballesteros said this year’s Sinulog grand finale will carry a “very Cebuano” theme that will showcase what the city’s future will be like.