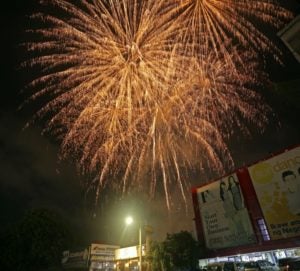 The skies over SM City Cebu were all aglow with the fireworks lighted up by six competitors from all over the country. (CDN PHOTO/LITO TECSON)

A slight drizzle of rain failed to dampen the dazzling display of fireworks that lighted Cebu City’s skies in last night’s Sinulog Pyrofest Competition at the SM City Cebu.

JNM Pyrotechnics of Lemery town in Batangas bested five other participants from around the country to become the “Pyro King of Sinulog,” said Brian Lim, the president of Pyroworks which organizes the annual competition.

“JNM also gave us a surprise as they used their own music to accompany their entry. That was not required, but they were allowed to,” he told Cebu Daily News.

Other winners were Chito Fireworks of Barangay Babag, Lapu-Lapu City which came in second place and Red Star Events of Trece Martires City in Cavite which won third.

All top three winners are first timers in the competition.

Lim said participants to the Pyrofest are limited to only six and are decided after applying with Pyroworks.

Their accommodations and travel expenses are paid for by Pyroworks.

“We give them support. But their equipment and design, materials, it’s all up to them. It’s showcasing their passion and bragging rights to be the Pyro King of Sinulog,” Lim said.

JNM Pyrotechnics wowed over 15,000 spectators at the parking lot and in the mall area with their multi-colored spiral fireworks, huge peonies and horsetails that blazed through the dark sky.

The rest of the participants were accompanied by Sinulog beats using a live tribal band provided by organizers.

The board of judges were composed of artistic directors affiliated with the National Commission for Culture and the Arts (NCCA).