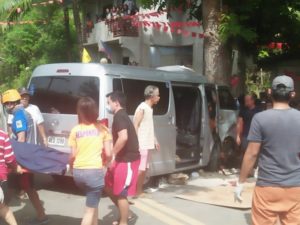 The Alegria road accident involving this Toyota Grandia van, which crashed into a mahogany tree, caused the death of seven visiting Filipino immigrants on a medical mission to Camiguin and injured three others.
contributed photo/Alegria police station.

Aside from Alegria crash, two teens also killed in Danao crash, 9 others injured

They were on a Cebu stopover to have a few days of vacation time before heading off for a medical mission in Camiguin Island in northern Mindanao next week.

All went well on Saturday morning for the 10 members of a medical mission delegation made up of Filipino immigrants from the United States, who spent the early morning swimming with the whale sharks in Oslob, a southern town at least 118 kilometers from Cebu City.

A few hours later, they piled into a rented tourist van and headed to their next destination, the Kawasan Falls in Badian town in southwestern Cebu.

Then at near noon that day as they were traversing Barangay Legaspi in Alegria town, which is 15 km from their destination – Badian town, tragedy struck.

The gray Toyota Grandia with plate number AED 1299 that they were riding on crashed into a mahogany tree after the driver, Gilbert dela Cruz, was believed to have fallen asleep on the wheel, killing seven of the passengers and injuring three others.

“Some of them are nurses and doctors. Five of them died on the spot. They are now in Reinhard Wirtgen Memorial Hospital (in Badian town) while the other three passengers, who were rescued alive, are confined in the Chong Hua Hospital in Cebu City,” said Senior Insp. Efren Diaz, officer-in-charge of the Alegria Police Station in a phone interview with Cebu Daily News on Saturday.

He said five of the passengers who survived the crash were rushed to the Badian hospital but two of them did not reach the hospital alive.

The other three were later transferred to the Chong Hua Hospital.

The driver of the van, Dela Cruz, 24, survived the crash and suffered only cuts and bruises.

He was treated at the Badian District Hospital and was released to the police and detained at the Alegria Police Station.

According to Diaz, initial investigation showed that that the driver, Dela Cruz allegedly fell asleep while traversing through the highway in Barangay Legaspi in Alegria town moments before their vehicle crashed into the mahogany tree that stood right beside the road.

“He admitted that he fell asleep a bit while driving. We tried to ask him if he was overspeeding, but he won’t say anything yet. We’re still determining at what speed the van was going minutes before the crash happened,” he said.

Diaz said that the road accident happened between 11 a.m. and noon.

He also said that Dela Cruz’s van was not a colorum vehicle and that its use was covered with supporting papers.

Diaz also said that Dela Cruz, who also owns the vehicle, would rent it for trips around Cebu occasionally.

Diaz said that they were also withholding the names of the fatalities pending the notification of their next of kin.

Earlier in the day, at past 1 a.m., a road accident in Danao City northern Cebu also claimed two teenagers lives, when the Nissan Navara pickup they were riding on rammed into a steel gate in Barangay Guinsay, Danao City, a city 37 km north of Cebu City.

Angeline Roble, 18, and Ace Peñalosa, 17, of Barangay Taytay, Danao City, were killed in the accident, while their eight other companions and the driver survived the crash, said Jason Cal of the Traffic Management Office of Danao City.