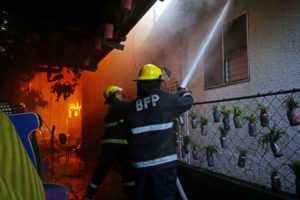 Cindy Almasa-Banzuela was just meters away from their house when the fire broke out in Sitio Baca, Barangay Apas, Cebu City yesterday (Tuesday).
Banzuela said her friend called and told her that their house was on fire.

“Wala nakoy labot sa among balay akong paumangkon akong gihuna-huna (I did not think about our house at that time. My concern was my nephew),” Banzuela said.

Banzuela was referring to her nephew Joshua Almasa, 11, who was sleeping alone in her sister’s house, which was adjacent to her house.

Banzuela and her family escaped the fire but they were not able to save anything from the house.

Banzuela’s house was among the the 12 houses that were destroyed by Tuesday’s fire, which also displaced 20 families.

Barangay Apas Captain Ramil Ayuman said he estimated that there were more or less 100 individuals or 20 families affected by the fire.

Cebu City Fire Marshal Noel Nelson Ababon, for his part, said that damage to property was around P400,000.

He also said that this is the fifth fire in Cebu City including that of the Metro Ayala fire in early January.

Aside from that a village volunteer was also hurt as he tried to help put out the fire.

Ababon said that village volunteer Emmanuel Waneya suffered cuts and first-degree burns on his right hand and leg as he tried to put out the fire using a fire extinguisher.

He said they had yet to determine the cause of the fire that started from the house of the Almasas about 8:30 a.m.

He said that they were checking reports about the entrance cap of an electric utility firm as probably where the fire started.

But, he said they were still verifying this.

Barangay Captain Ayuman said that the fire victims were evacuated to the barangay’s basketball court near the fire scene.

Ayuman said that they would do their best to declare the area safe for the victims to return by Wednesday. /With Correspondent Chris A. Ligan