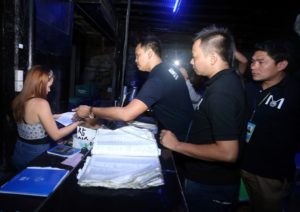 A Club Hatchi cashier receives a show cause order, issued by Mandaue City Mayor Luigi Quisumbing, from representatives of the Mandaue City Legal Office, Tuesday evening. The night spot, along with MO2 Resto Bar and The Sentral Bar and Lounge are being asked to explain within five days why their business permits should not be revoked for holding Sinulog parties lastJanuary 21 without a City Hall permit. (CDN PHOTO/LITO TECSON)

Mandaue City will soon have an ordinance which will require entertainment bars to register all their bouncers, security personnel and waiters at City Hall.

According to Mayor Luigi Quisumbing, the registration will be part of the city’s requirements for nightclub workers along with their police and NBI clearances.

“Aside from requiring them the police and NBI clearance, they should also agree to a random drug test,” said the mayor.

The move comes on the heels of intelligence reports reaching Quisumbing that some bouncers, security personnel and waiters are the very ones offering party drugs and other illegal substances to their customers.

Quisumbing talked with Mandaue City Vice Mayor Carlo Fortuna asking the latter to pass the ordinance in order to track down drug pushers including those possibly working in entertainment bars.

Establishments who have waiters, bouncers, and security personnel found to be involved in the illegal drug trade will also be investigated, said Quisumbing, with the possible revocation of their business permit immediately.

“We are very much concerned if these drugs such as Flakka would be distributed in these bars. That’s why we have the police closely monitoring them to prevent or apprehend if any people are responsible,” Quisumbing said.

The three night spots were earlier issued a show cause order by Quisumbing for holding Sinulog parties without the proper permits from City Hall.

The bars located at the North Reclamation Area (Barangay Subangdaku), M.C. Briones St. (Barangay Tipolo), and Norkis Cyberpark (Barangay Bakilid), respectively, were given five days to show cause why the city should not exercise its power to revoke or suspend their business permits for holding Sinulog parties despite being told days prior that the city will not allow it.

Many of those incidents were believed to have been caused by party goers who were either drunk or high on illegal drugs.