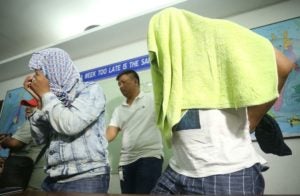 FROM CASINO TO JAIL. PO2 Cyrelle Bayate (left) of the Parian Police Station in Cebu City and Cordova Councilor Lemuel Pogoy, who were caught inside separate casinos in Cebu City and Lapu-Lapu City on Thursday, cover their faces as they are escorted by their arresting officers to the Regional Intelligence Division in Central Visayas (RID-7) office on Friday, Jan. 26, 2018.
CDN PHOTO/LITO TECSON

The spotlight shone on PO2 Cyrelle Bayate of the Parian Police Station and Cordova Municipal Councilor Lemuel Wahing Pogoy for violating Presidential Decree 1869 of Article 231 of the Revised Penal Code and Memorandum Circular No.6 signed by President Rodrigo Duterte.

Bayate was temporarily detained at the Fuente Police Station while Pogoy was brought to the office of RSOG-7 for questioning.

“The operation was not only conducted in the cities of Cebu and Lapu-Lapu. We have dispatched teams in other cities and provinces for simultaneous operations to monitor government employees who are engaged in gambling in casinos,” Ligan told reporters on Friday.

At 11:30 p.m. of Thursday, Pogoy, an incumbent municipal councilor of Cordova town, was caught playing with a slot machine at the Mactan Isla Resort and Casino, which is located in Sitio Ibabao, Barangay Agus in Lapu-Lapu City.

Senior Supt. Julian Entoma, CCPO officer in charge, headed the operation that led to the arrest of Bayate, a 30-year-old active member of the PNP and currently assigned at the Parian Police Station, or Station 1.

Chief Insp. Christopher Navida, CIB chief of CCPO, said Bayate was armed when she was nabbed by operatives. She was even unaware that the policemen were approaching her because she was too engrossed in playing the slot machine, Navida said.

While casino players are not supposedly allowed to carry firearms inside the establishment, Bayate was caught in possession of a paltik (homemade armed gun).

“The operatives confiscated from Bayate one .38 caliber Smith and Wesson revolver (paltik) loaded with four live ammunitions, a motorcycle with no plate number and no documents,” said Navida.

Bayate was in a civilian clothing and apparently not on duty when she gambled at the casino, but Navida said they had no choice but to arrest her, in compliance with President Duterte’s directive that prohibits government workers, particularly police and other law enforcement personnel, from gambling in casinos.

Both Bayate and Pogoy faced charges for violation of Presidential Decree 1869, or the Philippine Amusement and Gaming Corporation (Pagcor) Charter; Article 231 of the Revised Penal Code, which lists punishable offenses by public officers; and President Duterte’s Memorandum Circular No. 6 that bars government workers from entering casinos and other gambling places.

Senior Insp. Narolf Tan, station commander of Parian Police Station, said he was shocked when he learned that Bayate was arrested.

Tan affirmed that Bayate was not on duty when she was arrested in the casino.

Tan, however, admitted that Bayate was often unreachable whenever he needed her during her on-duty hours.

Tan said he had previously talked to Bayate and had advised her to complete her tasks first before she would go off duty so that they would no longer have to contact her for uncompleted tasks.

Until her arrest, Tan said they did not know that Bayate gambled.

But Bayate, when interviewed by Cebu Daily News, denied she was a frequent casino gambler, insisting she was just an occasional player.
She said she will seek the help of a lawyer.

“I will face the consequences of my action,” said Bayate.

In Lapu-Lapu City, Sucalit said that he and his team from the city police’s RID were implementing the order from the President to monitor and arrest government officials and employees who are into gambling in casinos when they learned that Pogoy was seen inside the Mactan Isla Resort and Casino in Barangay Agus of the city.

“After getting the go-signal from the higher ups, we automatically dispatched a team and sought help from informants, who helped identify government employees playing in casinos, which eventually led to the arrest of Pogoy,” said Sucalit.

Pogoy, 41, is a resident of Barangay Cogon in Cordova, the only other local government unit on Mactan Island. The other LGU is Lapu-Lapu City.
Pogoy has not been available for comment.

Navida said they conducted intelligence monitoring in different hotels with slot machines in the city after they received the order from Camp Crame, the PNP headquarters.

Ligan, on the other hand, warned all PNP personnel and government employees to stop playing in casinos and engaging in other form of gambling activities.

“Do not go to these areas. You will be arrested if you are caught in the act of being engaged in these activities,” said Ligan.

Ligan said they would continue to monitor government employees and police officers in Central Visayas who could be patronizing casinos or are involved in illegal gambling activities.

Ligan also encouraged the public to report any PNP member or government employee or official, whom they find in casinos. He said the tipsters will be considered as confidential informants.