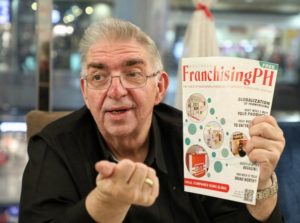 MORE homegrown businesses are exploring the possibility of franchising out their products — an opportunity which also opened doors to expanding overseas.

Rudolf Kotik, founder of RK Franchise Consultancy Inc., said some of their client-businesses have been able to expand their franchises outside the country, especially in the Middle East.

“Today, we are in a position where anything is possible, and even global. For example, Nitrofuel from Tacloban, we are bringing them to Saudi Arabia to open stations,” Kotik said in a press conference on Friday afternoon.

“The franchising world is like a barangay only in size,” he added.

Aside from Nitrofuel, other businesses that have opened franchises in the Middle East include Gerry’s Grill and homegrown coffee chain Bo’s Coffee.

This is why Kotik said more entrepreneurs are looking at expanding their businesses through franchising and exploring networking options like what will be expected during the 19th Cebu Franchise Expo, which is scheduled on March 2 to 4 at the SM City Cebu.

A total of 70 exhibitors including at least three homegrown brands are expected to join the expo.

Among the homegrown brands which have signed up for the event area Lemon Co., Lugaw ni Bossing, and Cebu Innosoft.

Kotik saidd that the food and beverage sector still dominates the franchising market getting around half of total market shares.

Second is vanity brands, from nails to eyelashes, that take up 20 percent of market share; while third is health-related brands like drug stores and laboratories, he said.