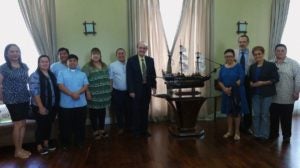 Joaquin Rodriguez, president of the Filipinas Quinto Centenario, (7th from left) visits Cebu officials led by Vice Gov. Agnes Magpale (4th from right) at the Capitol to discuss about the preparations for the fifth centenary of the arrival of Christianity in the Philippines./PHOTO BY ADOR MAYOL

The preparations for the fifth centenary of the arrival of Christianity in the Philippines in 2021 have begun.

Officers of the Filipinas Quinto Centenario convened at the Cebu Capitol on Wednesday morning to discuss about the series of events to commemorate the beginnings of Christianity in the country.

The plan includes inviting Pope Francis, the king of Spain, as well as presidents and prime ministers of Portugal, Mexico, Argentina, Brazil, Uruguay, and other countries with huge Spanish influence.

The three-year event will start in 2019 and culminate in 2021, exactly 500 years since Portuguese-born Spanish explorer Ferdinand Magellan and the Augustinian missionaries arrived in the Philippines.

Joaquin Rodriguez, president of the Filipinas Quinto Centenario, said Cebu will be the main venue of the activities.

“We’ve been working hard in Manila for this event, but this cannot succeed without Cebu. The epicenter and focal point of all these events is Cebu,” he told reporters in an interview shortly after he met with officials of the Cebu provincial government.

With him was Juan Manuel Montel Castro-Rial, the executive director of the Sociedad Española de Beneficencia.

Cebu Vice Gov. Agnes Magpale said an executive committee has been formed to be supervise the preparations.

“Accordingly, there will be a summit to revisit all the places visited by Magellan. The execom will help to easily convene all the agencies that are part of the preparations,” Magpale said.

Among the events that will be commemorated are the first Mass in the country, first baptism, and the arrival of the image of the Sto. Niño which was given as gift by Magellan to Cebu’s Queen Juana in 1521.

Rodriguez said all the events will be broadcasted by an international television company and will be shown worldwide.
“There are just so many events to be celebrated. You can’t close your eyes to it. It has to happen,” he said.

Rodriquez said the events will start to unfold next year to commemorate the time Magellan left Spain and led a fleet of five ships out into the Atlantic before arriving in the Philippines after two years and 10 months.

“Time is close and we have to do things rather quickly, but I’m confident that this is going to be a big success,” he said.

The Catholic Bishop’s Conference of the Philippines is also prepararing for the big event in 2021. Since 2012, different pastoral themes have been introduced in the different archdioceses and dioceses in the country as part of the nine-year “journey” towards 2021.