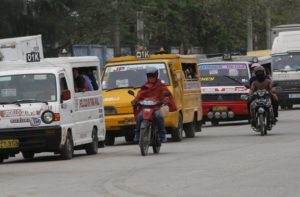 Despite the early warning, some motorists, 45 of them to be exact, still got caught violating Cebu City’s anti-counterflowing law which was fully implemented on Monday, January 5, 2018.
CDN FILE PHOTO

As expected, a lot of drivers still violated the counter flow traffic rule despite the early warnings issued by the city prior to its full implementation yesterday.

Ouano said they were not surprised by the huge number of violators.

Under the EO, reckless drivers or violators shall be prosecuted in accordance with the existing traffic laws, ordinances, circulars, rules, and regulations.

Once violators are apprehended, their vehicles will be impounded for 30 days with no fines or storage fees collected.

However, Ouano said that they issued citation tickets to drivers for reckless driving which has a fine of P500 under City Ordinance 801.

(Aside from the counter flow EO of Mayor Osmeña we also issued citation tickets for reckless driving. But we won’t fine them for impounding).

Ouano said that since counterflowing has been prohibited even before, the drivers have no reason to violate the law.

Ouano said that it is even stipulated in Republic Act 4136 that counter-flowing is a violation of traffic rules.

(We apprehended drivers from the cities of Talisay and Toledo and they claimed that they were not aware of the new traffic rule being implemented in the city. However, I told them that the said rule has been there a long time ago. In fact it was discussed in seminars when they get their license)
Ouano warned that they will be on the streets 24 hours a day so drivers should not counterflow.

The impounded vehicles are now at the South Road Properties (SRP) where the city allocated 1.5 hectares as an impounding facility.