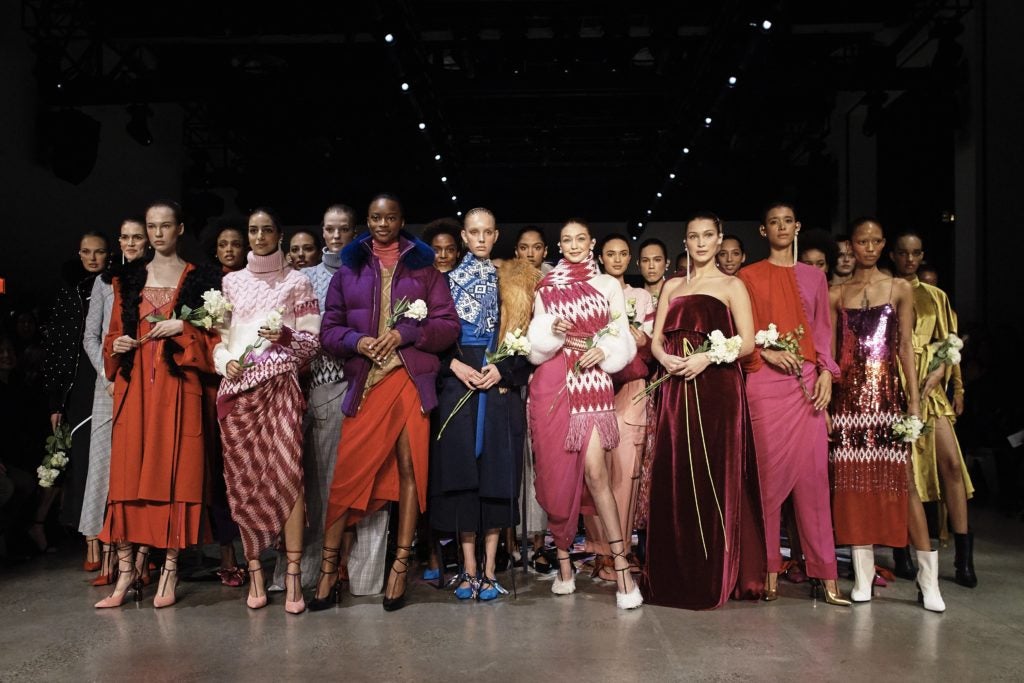 Gigi Hadid as his opener and her royally dressed sister Bella at the end, Prabal Gurung celebrated the strength, grace and resilience of women in a collection full of vibrant purples, reds and blues, inspired in part by the women-led Mosuo tribe of China.

Gurung, raised by a single mother in Nepal, said in a backstage interview he’s had matriarchies on his mind for a collection over the last four or five years, deciding to go ahead with this one now amid the recent movements bringing women together to fight back against sexual misconduct and oppression around the world.

His bright pinks, some in lush cashmere and wool knits hand done in Nepal, and his sari and sarong-inspired draping, he said, were references to the Gulabi Gang of women activists in Northern India. They “adorn themselves in pink saris symbolic of their self-proclaimed power and fearlessness,” Gurung said, as they come to the defense of women, vigilante style.

There were other elements, feather and sequin detailing, the use of velvet and pearls, that generally symbolized ceremonial wardrobes.

Gigi Hadid opened the show in a porcelain-white cashmere turtleneck with fox trim on the sleeves, an orchid-colored skirt and a draped sarong overlay that wound around her neck and fell below the waist.

He also embraced the practical, in shearling and quilted puffer jackets inspired by the need to trek.

Gurung said he grew up in a culture where color is celebrated in the clothes. After seeing the wear-black protest at the Golden Globes, he said he wanted to show women “in their full feminine glory.” Back home, he said, “color and texture was kind of unnerving for men.”