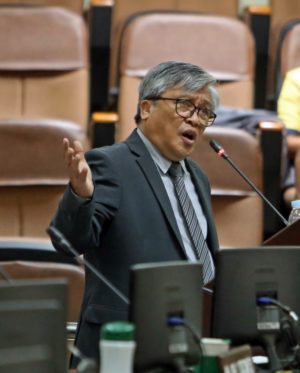 In yesterday’s regular session, Alcover condemned what he said was the mayor’s hostile action towards Sheriff El Cid Caballes during a heated argument over a scheduled demolition in Sitio Sta. Cruz Barangay Capitol Site last Feb. 7.

Alcover played a video that went viral in social media that showed Osmeña and Caballes in a heated argument at the site.

Residents of Sitio Sta. Cruz asked the mayor’s help after Caballes allegedly harassed and forced them to leave their area even when their houses were built within the lot owned by the national government.

Councilor Eugenio Gabuya defended Osmeña and said the mayor only got tough on Caballes to defend the settlers.

Gabuya said based on what he learned, the court order only covered the demolition of houses located within the 9,000 square meters owned by the Quijada family.

At least 50 families were affected by the demolition which they claimed was “illegal.”

Alcover said he isn’t against Osmeña defending the residents and has no argument over any legal remedies to be resorted to by the parties concerned.

“Violence will never justify anything. No ideology and lofty ideals can justify violence and intimidation,” Alcover said.

In a TV interview, Osmeña confirmed that the court order didn’t include a technical description of the area to be covered by the demolition.

“I am (only defending) government property,” he said.

Read Next
59% of Filipinos want career over love life