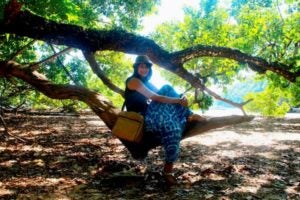 More than her command of literature, humor is Johanna Michelle Lim’s choice of weapon.

Her book—“What Distance Tells Us: Travel Essays About the Philippines,” published by Bathalad, launching on Feb. 23 —narrates first-hand experiences and conversations with people she has made friends with as she goes around some regions in the archipelago.

She always sees the funnier side of things.

Whether climbing the jagged Cordillera ranges or standing 7,400 feet above sea level, she translates them into self-deprecating humor: a sign of literary intellect.

“A newbie at backpacking, the bag I prepared feels too loose, too jangled, too unsteady on the back. And as early as going to, I find myself haunted by ghosts of the forgotten—a scarf, a shirt, an unsaid reminder, an unwritten note—all seemingly essential from last-minute panic,” Lim
writes, after commencing the journey from Cebu, her hometown.

“There wasn’t even supposed to be a trip. The name on the ticket is not mine. Later, I would practice a signature I have never used, and answer
to a nickname I have never heard.”

I have traveled and reported a few in newspapers, too, so I can imagine how she has discriminately collated the events in one cohesive stream. It is divided in four chapters tailored to the four compass points, zeroing in on the sites she has covered. Up north, Mountain Province, Benguet, and Batanes are enlisted while Iloilo, Palawan, and Islas de Guimaras are among the places she visited. Let’s talk about the lush vegetation she found down south—Zamboanga, South Cotabato, and Tawi-Tawi—and the waves, too, in Siargao that completes the east bucket lists: Camiguin and Northern Samar—she has observed how the lone highway becomes an odd partition of lands.

To her, there are no flatlands this side of the world.

Curiosity rises from how the architecture of some pension houses, restaurants, and souvenir shops has been attained.

Mornings are cold, so expectedly, coffee blend aromas waft from the wide windows of her neighbors.

She also says that the Kankanaeys (native people in northern Philippines) prohibit women in some territories for fear of bad harvest.

But perhaps, kindred spirits could have brought the author to this certain bevy of friends.

Chronicling the meeting, she shares: “I join a group of three women in their thirties, mid-level managers, all single.

They called themselves lady boys as a joke to those who constantly asked why we were an all female group.

‘We’re not girls,’ they would declare to old men shining their shoes on the wooden steps of Bangaan, ‘We’re lady boys’.’

But who is Ricky A. Vegetarian?

In Guimaras, Lim intrigues us with a subtitle that reads: “Sex, Drugs, Rock and Roll, and Vegetarianism.”

There’s a lecture about the demise of animals and the dash of prayer that makes the food serving more palatable until she is drawn close to his love affairs.

In Zamboanga City, her crystal bracelets (aquamarine, citirine, rose quartz) have become someone else’s lucky charm after a selfie was taken by a police officer who fastened the Baby Armalite in his knees.

She embarked on a trip that crossed four kilometers of sea that divided the Centrio Latino.

“This distance is more difficult to trace. It is the interval between two points in time—the route from where I started this very act of estrangement, to my here and now,” the author ponders.

But I am sure it all can be decoded to one purpose of her travels—“I am in La Trinidad in search of magic beans.”