ANOTHER FEATHER IN HER CAP 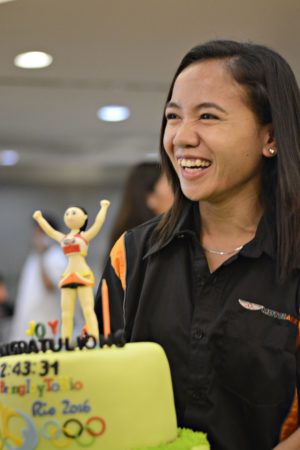 Cebuana runner Mary Joy Tabal will be feted anew by the Cebu City government after she was included in the list of outstanding individuals of Cebu City.

Every year, the Cebu City government awards outstanding individuals, organizations, companies, firms or corporations who have contributed to the growth and development of Cebu City through the city’s Cultural and Historical Affairs Office (CHAO).

Tabal and the rest of the awardees will be honored during the Cebu City Charter Day celebration on Feb. 24 at the Waterfront Cebu City Hotel and Casino in Lahug, according to acting CHAO head Bryner Diaz.

The 28-year-old Tabal from Barangay Guba, Cebu City has had a colorful career in running.

Despite her numerous local and international accolades, Tabal still considers this award special.

“I’m shocked and deeply honored to be among the outstanding Cebuanos,” said Tabal, who was not yet informed about the award until she was called for her reactions. “It’s really a morale booster to be recognized.”

Tabal, of the Motorace Kawasaki team, said she believes this award is an inspiration not only for her but also for other Cebuano athletes.

Tabal is also set to receive a major award from the Philippine Sportswriters Association (PSA) on February 27 at the Manila Hotel in Metro Manila.

The city will also give a posthumous award to Vicente Rubi, a Cebuano composer who wrote and composed the famous Visayan song “Kasadiya Ning Taknaa” and Grand Master Choa Kak Sui, who is the founder of Pranic Healing.

TAGS: another, CAP, feather, her, in