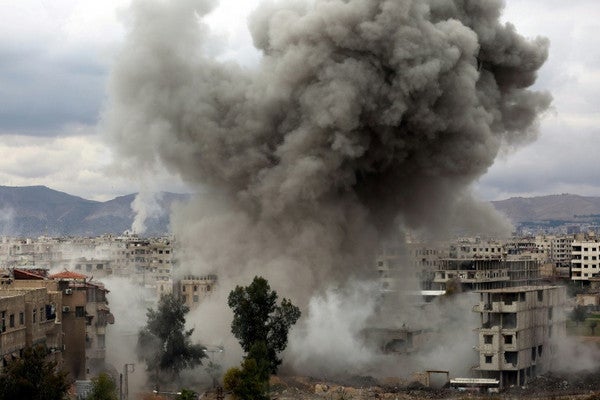 Syrian regime air strikes and artillery fire hit the rebel-held enclave of Eastern Ghouta for a sixth straight day Friday as the world struggled to reach a deal to stop the carnage.

More than 400 civilians have been killed in one of the seven-year Syrian conflict’s bloodiest episodes and rescuers were finding more bodies buried in the rubble.

Russia, whose warplanes are also bombing the Eastern Ghouta region, stalled a deal at the United Nations for a 30-day humanitarian ceasefire late Thursday but a vote was rescheduled for later Friday.

Few of the enclave’s estimated 400,000 residents — mostly living in a scattering of towns across the semi-rural area east of the capital — ventured out on Friday.

An AFP correspondent in Douma, Eastern Ghouta’s main town, saw a handful of people stealthily crossing rubble-strewn streets to assess damage to their property or look for food and water.

But death has fallen from the sky relentlessly since government and allied forces intensified their bombardment on Sunday and rocket fire soon forced everybody to run for cover.

Exhausted and famished families cowered in cramped and damp basements, exchanging information on the latest casualties of the government’s blitz.

Some of the only people braving the threat of more bombardment were medical staff in those hospitals still standing and rescuers sifting through the wreckage of leveled buildings.

“The air strikes and the artillery fire are continuing on several towns in Eastern Ghouta,” Rami Abdel Rahman, the head of the Britain-based monitoring group, told AFP.

He said that five of the nine people killed on Friday died in air strikes on Douma, the main town in the enclave east of Damascus, and that two of them were children.

The latest deaths brought to 426 the number of people killed since the Syrian regime and its Russian ally intensified their bombardment of the besieged area on February 18. More than 2,000 people have been wounded.

“The death toll is likely to go up, there are many wounded in critical condition and victims trapped in the rubble,” said Abdel Rahman.

Diplomats at the United Nations failed to clinch Russian approval late Thursday on a resolution calling for a 30-day truce to allow for humanitarian aid and medical evacuations.

They then announced that a vote would take place on Friday but did not make clear whether they had rallied Moscow to a new draft.

Read Next
TIME FOR CHANGE