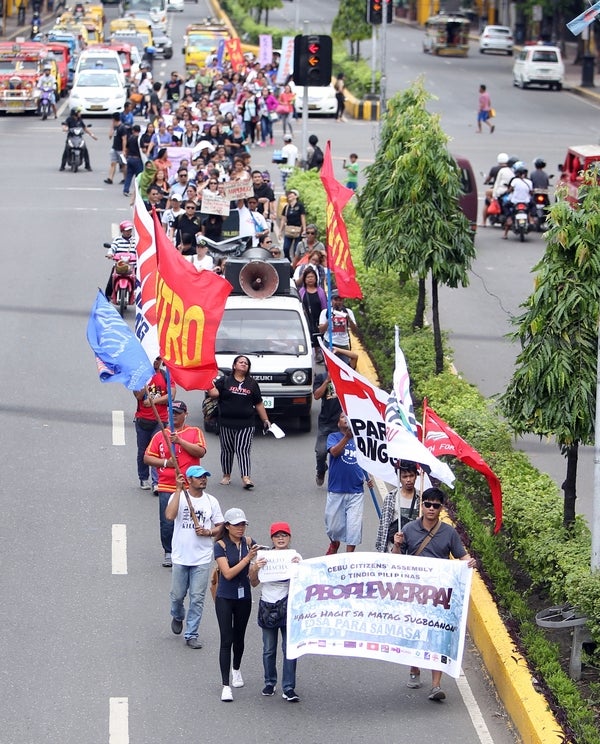 SOME 200 rallyists from the Cebu Citizens Assembly, a coalition of cause-oriented groups in Cebu, marched in Cebu City to voice their concerns and celebrate the 32nd Edsa People Power Revolution.

Jovanni Polestico, a community organizer of Kilusan para sa Pambansang Demokrasya (Kilusan) Cebu, said that despite their number, they still see the significance of celebrating this day.

He said that the public should be informed and made aware and should take part in what is happening in the country today.

He also said that the group would also hold forums in some universities and communities in Cebu to help educate the public on today’s issues and of the Martial Law years.

Aside from commemorating the Edsa People Power Revolution, the cause-oriented groups have also condemned the administration of President Rodrigo Duterte.

They expressed their sentiments through their flags and tarpaulins stating their stand on issues against the government during the rally.

Polestico also criticized Duterte for not participating in the celebration to mark the Edsa People Power Revolution that ousted the late former President Ferdinand Marcos.

Polestico was referring to the announcement of Harry Roque, presidential spokesperson, on Friday, that Duterte would skip this year’s commemoration and would go to his hometown city in Davao instead.

The militant groups, who joined the march, were made from the Kilusan Cebu, Akbayan, The Silent Majority (TSM), Partido Manggagawa, Pangisda Cebu, Pilipinas, and Tindig Pilipinas Cebu. They voiced out their grievances to Duterte’s implementation of Tax Reformation for Acceleration and Inclusion (Train) Law, proposals of federalism and Charter Change.

Among those who joined yesterday’s rally was fisherman Crispin Caya, 54, who voted for Duterte in the last elections.

Caya, who is from Lapu-Lapu City, said he joined the rally to voice his disappointment with President Duterte.

He claimed that he had not seen the change that Duterte promised them during the election period.