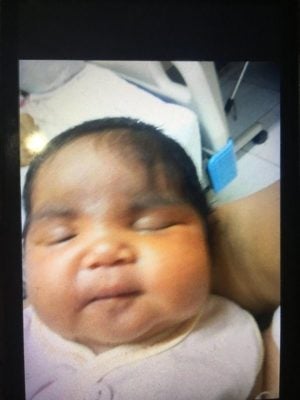 Police investigators are looking for a woman who allegedly walked away with her friend’s two-week-old baby at the comfort room of the Cebu Metropolitan Cathedral last Wednesday, February 21.

The infant’s 31-year-old mother, Irene Capuno, sought the help of the Cebu City Police Office (CCPO) for the recovery of her newly-born baby girl whom she purportedly entrusted to a certain Chera Jane Quizon while she went inside the cathedral’s comfort room.

“All I want is my daughter. I promise not to go after her (Quizon) as long she will return my daughter,” she said in Cebuano in an interview on Monday.

Supt. Ryan Devaras, chief of the Cebu City Investigation and Detective Management Branch, appealed to the community for help as they distributed pictures of the missing infant and the suspect.

“We’re conducting an investigation and we want to know what the motive of the suspect was in taking away the baby,” Devaras said.
“This could be a modus of a syndicate or simply for the suspect’s own consumption,” he added.

“I was seven months pregnant at that time. She (Quizon) befriended me, and told me that she wanted to have my baby. I said ‘no’, especially that I have a husband,” she said.

Last February 21, 11 days after she gave birth to the youngest of her five children, Capuno said Quizon went to their house and invited her to go with her to the Basilica Minore del Sto. Niño in Cebu City to thank God for a healthy baby.

Quizon, she said, claimed that she was also three months pregnant.

Capuno agreed to go with Quizon to the basilica with her newly-born baby where they stayed for some time. At the centuries-old church, the two women took turns in carrying the child, before going to a department store in downtown Cebu City to have some snacks and refreshments at around 3 p.m.

While on their way home, Capuno said they dropped by the comfort room of the Cebu Metropolitan Cathedral.

“When I went out of the comfort room, she (Quizon) and my baby were gone. I tried to look for them but to no avail,” she added.

Police secured photos of the suspect as shown by video taken from the basilica’s closed-circuit television (CCTV) camera while she was with the complainant inside the church.

There were, however, no CCTV footage outside the cathedral’s comfort room.

Read Next
Three out of 80 villages submitted garbage skeds