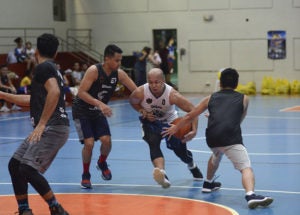 The Bears’ Paul Joven drives to the teeth of the Cobras’ defense.
contributed photo

THE TIGERS did not waste time in making a statement that they are all in for a run at the title as they dismantled the Pandas, 112-58, at the start of the Metro Cebu Basketball League-Cebu Weekend Basketball Club last Sunday at the City Sports Club-Cebu basketball court.

Cebu First District representative Gerald Anthony Gullas spearheaded the Tigers’ attack as he finished with 25 points and eight rebounds. Former University of Cebu standout Janjan Auditor, also had a stellar all-around showing with 16 points, nine rebounds, four assists and three steals.
In other games, the Bears took down the Cobras behind the impeccable shooting of former University of San Carlos Warriors forward Sam Hermosa. The 6-foot-1 cager had 22 points, five boards and two steals to help carry the team to the opening-day victory.
The Bulls also shot down the Phoenix, 101-94, as Mark Monte went berserk and scored 33 points.
The Wolves, meanwhile,  slipped past the Piranhas, 72-70, behind the solid showing of former University of Cebu guard Junas Misa, who fired in 16 points and grabbed seven boards.
Read Next
Global Cebu, Bali United forge draw