Unsegregated garbage will no longer be collected 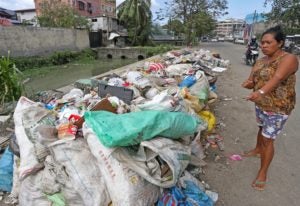 UNCOLLECTED GARBAGE IN BARANGAY TEJERO/JAN. 24, 2017: Alma Obsequas a resident of sitio villagonzalo 2 barangay Tejero complaint of the uncollected garbage at David C. Gaisano street that was their before the Sinulog celebration. She said that DPS collected only half of the garbage then it will not come back to finist the collection that increased the garbage.(CDN PHOTO/JUNJIE MENDOZA)

Starting today, March 1, the Cebu City government will again make another attempt to strictly enforce its “no segregation, no collection” garbage policy.

It is a tall order considering that not one of Cebu City’s 80 barangays has truly complied with the city’s garbage laws: Ordinance 1361 or the Anti-Littering ordinance passed in 1990; and Ordinance No. 2031, mandating the segregation of trash at the source passed in 2004.

The two ordinances have been largely ignored by the city’s residents no matter the efforts to strictly implement them since 2011.

Exactly four years ago, on March 1, 2014, Cebu Daily News reported that Rolando Ardosa, who was then the chief of Cebu City’s Department of Public Services (DPS), announced that barangay officials were committed to enforce waste segregation in their areas.

Ardosa was quoted as saying that the city began strictly enforcing its “no segregation, no collection” policy in April 2011 but enforcement slackened in 2012.

Only 20 percent of the garbage, Ardosa said, was segregated.

On June 28, 2016, Cebu City Councilor Margot Osmeña, who was then the acting mayor, reopened the city’s sanitary landfill in Barangay Inayawan as a short term solution to the city’s garbage collection problems.

On that same day, Margot ordered a strict enforcement of the city’s existing “no segregation, no collection” policy.

With the city’s new round of “strict enforcement” initiatives beginning today, where then lies the difference with attempts made before which had all but failed to properly segregate solid waste and collect garbage more efficiently?

The household visits are not often friendly.

“We encounter criticisms and harsh words from people because of this move. We learned to just ignore the harsh words but still listen to suggestions. But they (residents) should know that this is a step that we need to take,” said Cabrera, a former Cebu City Councilor who also later served as Mayor Tomas Osmeña’s environmental consultant.

Cabrera said residents do not have to buy garbage cans to separate biodegradable and non-biodegradable waste as even rice sacks will do for as long as these are properly labeled so that family members will know which one is assigned for a particular waste.

Cabrera hopes that with the serious enforcement of the garbage policies starting today, barangays will heed the call to properly segregate solid waste especially since the efforts are also in accordance with Republic Act 9003 or the Ecological Solid Waste Management Act of 2000.

Specific drop off points where residents could leave their segregated residual and special waste for pick-up by garbage trucks have been identified for each barangay.

Community service will be required for residents who cannot afford to pay the fine.

The current area for community service is the 24-kilometer highly polluted, “biologically dead”, Butuanon River which flows through the cities of Cebu and Mandaue.

Erring Cebu City residents will be required to do at least five-hours of service in river clean up as Mandaue City has an existing rehabilitation plan which includes putting up parks, a commercial strip and mid-rise housing units near the river.

Republic Act 9003 and Cebu City ordinances 1361 and 2031 also penalize habitual violators of the garbage segregation policy with imprisonment from one to six months.

It will be the head of the family who will be made to face the sanctions.

Cabrera said that plywood-sized bulletin boards will soon be set up at the vicinity of the Cebu City Hall building and the Fuente Osmeña Circle where the names of the compliant and non-compliant barangays will be posted.

Non-compliant barangays will be issued a summons by the end of March to explain their inability to comply with the city’s garbage policies, Cabrera said.

According to data from the Department of Public Services (DPS), Cebu City generates an average of 600 tons of garbage daily.

The volume of trash goes up on special events such as the Sinulog, Christmas holidays, All Saints’ Day and All Souls’ Day.

In 2017, the city government spent around P300 million for hauling and tipping fees.

DPS Head Roberto Cabarrubias said the city has enough garbage trucks and collectors to follow through with the policy’s implementation.
DPS has 20 garbage truck units and rents 21 other garbage trucks from Pasahero Motors Corporation (Pamocor).

Cabarrubias said the city is also renting 11 dump trucks and 10 compactor trucks from Pamocor from March till June 2018.

Following CCENRO’s lead, Cabarrubias said DPS will not collect unsegregated garbage and will not pick up a certain garbage type if it does not fall on schedule.

“Once it is not segregated then we will not collect it,” Cabarrubias said.

More than their commitment to solve Cebu City’s perennial garbage problem, Cabrera said enforcing policies is really a battle in convincing every single resident about the need to properly segregate their garbage for their own benefit.

“It is easy to make an excuse that they do not know that the policy is now being enforced. But how many times have we conducted orientations and campaigns regarding waste segregation? That is why we have to put our foot down and implement this policy,” said Cabrera.

Cabrera said they have conducted orientations and household visits in more than 50 of the city’s 80 barangays.

But they nonetheless decided to go ahead with the implementation because “we have been disseminating information for quite some time, it is time to take action,” said Cabrera.

In Barangay Mabolo, Lane, 30 and mother of two, said she was not aware of the “no segregation, no collection” policy until she read about it in the newspaper.

“Wala man gud sila (City Government) nagpatuman og sakto gyud. Naa na sauna then na wala na then karon naa nasad. Dili sila consistent ba (They did not implement the policy correctly. They implemented it before, stopped and then at present, they are enforcing it again. They are not consistent.)” Lane noted.

Lane believes that the “no segregation, no collection” policy will succeed if the city government is strict about its implementation and the public chooses to be cooperative and disciplined.

A University of San Carlos (USC) study by faculty member Rochelle Marie Lerios, examined the relationship between rights and duties in pro-environmental behavior through a survey of 149 respondents from Barangays Mambaling and Talamban.

The two barangays were chosen because they have at least two major solid waste management policies.

The study used the right-duty framework which means that while individuals have the right to a healthy environment, there are also corresponding duties to undertake, which include following laws such as RA 9003 in order for them to enjoy their rights.

Lerios said the study found that people only knew of their rights to a healthy environment but do not consider their duties.

“Though people know they have certain duties, they have however not associated these duties to the rights that they are entitled to. For them following a policy because it is their duty is not a response to the privileges they get as citizens of this country,” noted Lerios.

Despite the challenges, Cabrera said they will continue to push forward in implementing environment-friendly policies.

“We are starting with educating the households for now. We are doing this slowly,” she said.

“Countries such as Japan also took many years before they worked out a strategy on solid waste management. We will continue doing what we do,” added Cabrera.