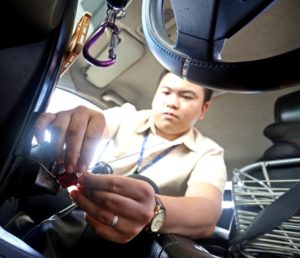 One of several personnel of the Land Transportation Franchising and Regulatory Board (LTFRB-7) recalibrates a taxi’s fare meter at their tent area in the South Road Properties (SRP).
CDN Photo/Lito Tecson

Free haircuts and massages awaited taxi drivers who had their fare meters recalibrated yesterday as required by the Land Transportation Franchising and Regulatory Board (LTFRB-7) regional office.

“Grooming is part of efforts to make the drivers look pleasing to their passengers,” he said.

As of yesterday, about 432 taxis had their fare meters recalibrated at the LTFRB’s makeshift tents at the South Road Properties (SRP).

“This is also an opportunity for us to estimate the number of legitimate (taxi) units in Cebu,” he said as LTFRB personnel placed stickers on the taxis with recalibrated fare meters.

Cuizon said there are 6,000 taxi units operating in Cebu.

These taxis can start collecting the flag down rate of P40 with an additional P13.5 for every succeeding kilometer and P2 for every two minutes waiting time during traffic.

The recalibration of taxi fare meters started last Feb. 19 and will end on June 4.

Cuizon called on taxi operators to have their fare meters recalibrated on the date of their schedule to avoid being fined P200 for every delay.

Taxi units with plate numbers ending on numbers 2 and 7 are scheduled to have their fare meters recalibrated from Feb. 19 to March 12.