Hayco not worried with DTCC’s low output in DSCPI competition 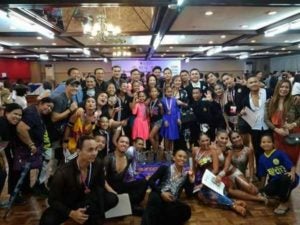 Dancesports Team Cebu City (DTCC) team manager Edward Hayco said he is still satisfied with the performance of his team in the 2018 DanceSport Council of the Philippines (DSCPI) 1st Quarter Rankings and Competition held at the Ballroom Hall of Valle Verde Country Club in Pasig City, Metro Manila over the weekend.

Hayco said the low medal count is only because the team just sent 12 couples to the event. Usually, it sends 25 to 30 couples.

“We didn’t have to send many because we are hosting the September ranking,” Hayco said. “Our main purpose of sending them there is for them to experience a national competition.”

Team coordinator Jenette Flores also said the low medal output was due to DTCC’s lack of strong contenders in the Modern Standard category.

Flores, however, said that they will add more focus to the Modern Standard category training for a better output in the next quarterly competition, which is the mid-year ranking in July.

Hayco said he is satisfied with the team’s performance because more than half of the team finished with gold medals and members of the DTCC also placed in the top 3 in all divisions of both Standard and Latin categories.

Leading the DTCC gold medalists with two gilts was the pair of Nigel John Angel and Shadelle Niña Hernandez via the Juvenile C Latin and Juvenile A Standard.

Other gold medalists were the pair of Jake Emmauel Corro and Kim Jocson, who topped the Latin Youth C; Gylle Niño Diluvio and Yeddah Marie Castañares, who ruled the Youth A Standard; John Lloyd Leyson and Jannah Marie Pugoy, who dominated Latin Jr. C; Simon Lloyd Asuque and Jasmine Kate Labra, who were unbeatable in the Youth A Latin; and the duo of Kharl Michael Miñoza and Sofia Isabella Quolaton, who placed first in the Juvenile C Standard.

Handing in two silver medals was the couple of Hezekiah Sobrevega and Rowella Rydel Pat via the Jr. C and Jr A Standard.

The pairs of Diluvio and Castañares and Miñoza and Quolaton also accounted for silver finishes in the Youth A Latin and Juvenile A Latin, respectively.

The partnership of Leyson and Pugoy also managed a bronze finish in the Latin Jr. A, the same with Corro and Jocson in the Youth C Standard.