AGUIRRE: TOMAS GOT P7M FROM JAGUAR 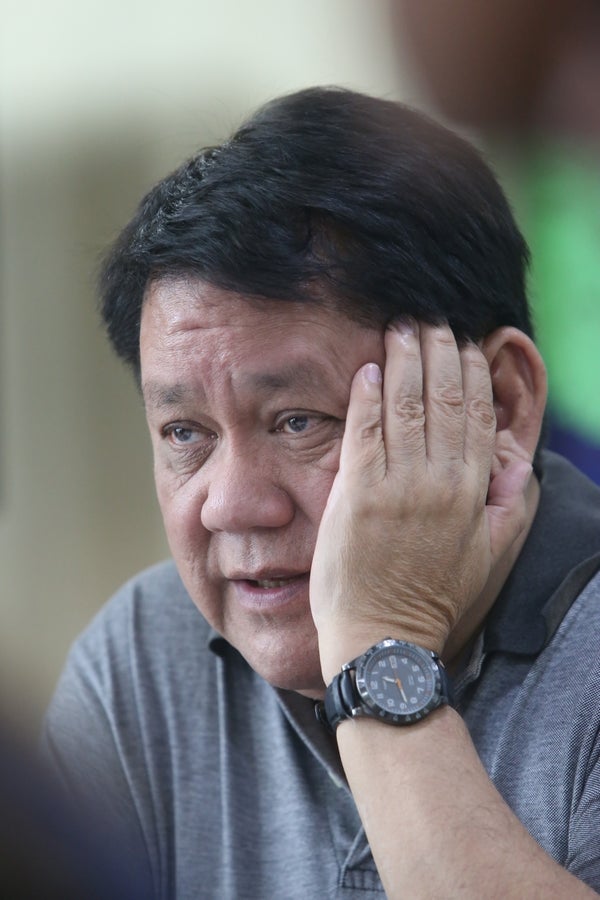 He earlier dangled a cash incentive for every dead drug suspect.

Now, Cebu City Mayor Tomas Osmeña found himself on the other end of the spectrum after he was tagged as a protector of drug lords.

Justice Secretary Vitaliano Aguirre II on Monday said he was filing a case against the mayor whom he accused of being in a payroll of drug lords.

“I did not want to disclose it yet, but we already have an affidavit. A witness said he (Osmeña) was under the payroll of drug lords,” he said.

Others identified by Diaz as Jaguar’s protectors were retired Chief Supt. Vicente Loot and four other police officers.

Jaguar, considered Central Visayas’ top drug lord, was gunned down by Cebu City-based policemen in a shootout in Las Piñas City on June 17, 2016.

A month after, Derilo and Ylanan were relieved from their posts by Camp Crame after the two police officials were named by self-confessed drug lord Franz Sabalones, who was based in San Fernando town, south Cebu, as among those who received protection money from him.

Osmeña just scoffed off the accusation hurled against him by Aguirre and challenged the Justice secretary to prove it.

“Go ahead. Why? Was I the one who released Peter Lim? Ako na hinoon ang nahimong drug protector. (And now, I’m the one being tagged as a drug protector). Go ahead,” he said in a press conference at Cebu City Hall.

Osmeña was referring to the ruling of a panel of prosecutors that dismissed the drug trafficking charges filed by the Criminal Investigation and Detection Group (CIDG) against Cebu businessman Peter Lim, self-confessed drug lord Rolando “Kerwin” Espinosa Jr., and several others.

The outcome of the case irked President Rodrigo Duterte who threatened to have Aguirre replace Lim and Espinosa in jail if the two men go scot-free.

Aguirre subsequently created another panel to investigate Lim and the other respondents while asking the parties to submit all necessary evidence.

In a news conference on Monday, Aguirre said Osmeña may be held liable for the “protection of drug lords” in connivance with some police officials.

“I’m having it reviewed now by the NBI (National Bureau of Investigation) and see if there could be some additional evidence (against Osmeña),” he added.

Aguirre claimed Diaz had been under the Witness Protection Program of the Department of Justice (DOJ) for over a year now.

Before pointing fingers, Osmeña advised Aguirre to first answer queries why the DOJ dismissed the charges against Lim.

The mayor also accused Aguirre of ordering the dismissal of the criminal complaint he filed against SM and BDO which allegedly paid a measly P35 in taxes to the Cebu City government in 2015.

“Ok. Let’s say it (accusations that I am a drug protector) is true. Does it also mean he’s not guilty (of meddling in these Lim, BDO, and SM cases)? Is this the way you’re going to defend yourself: ‘I’m innocent because Mayor Osmeña is a drug protector,’” Osmeña said. “Yabag kaayo siya oy. (Aguirre is a fool). Don’t mislead the public. Answer the accusations against you,” he added.

Osmeña said he was open to any investigation and was willing to undergo a lie detector test to prove he was telling the truth.

“But it (lie detector test) should not be conducted by the National Bureau of Investigation (NBI). With all due respect, I don’t trust the NBI since it is under the DOJ,” Osmeña said.

Both the NBI-7 and the Police Regional Office in Central Visayas (PRO-7) were tight-lipped over Aguirre’s claims.

Supt. Reyman Tolentin, spokesperson of the PRO-7, said they had no idea what the Justice secretary claimed and where he got the information against Osmeña’s alleged involvement in the drug trade.

“We don’t know about that. That came from (Aguirre),” he said.

While the NBI has a list of drug personalities or their accomplices, Bernales said it is in the possession of their higher-ups in Manila.

“We (NBI-7 officials) wouldn’t know who are on the list. It’s only (the NBI central office in) Manila who has it,” he told Cebu Daily News.

Since launching his brutal drug war in July 2016, President Duterte had repeatedly named local executives and other public officials supposedly involved in the illegal drug trade.

Osmeña, a scion of one of the country’s most influential political clans, was never mentioned by the President in his so-called “narco list.”

But Osmeña was criticized by human rights group for offering a P50,000 reward for every drug and crime suspect and P5,000 each for those wounded as part of his campaign against illegal drugs and other crimes.

He stopped his program in July 2016 after he felt slighted that he was not consulted when the Philippine National Police relieved his two preferred police officers — Chief Supt. Patrocinio Comendador, then PRO-7 Chief; and Senior Supt. Benjamin Santos, then Cebu City police director.

By the time it ended, the mayor gave P625,000 for 12 slain suspected drug dealers who operated in the city including Jaquar.

Aguirre’s accusations against Osmeña also came a week after the mayor announced his plans of filing disbarment and formal complaints against the Justice secretary for allegedly meddling in the cases he filed against SM and BDO.

“I’m going to push for the disbarment of Aguirre. The country is better off without him. But we’re still going to study on how to do it. He’s breaking a culture here. He likes to forgive people. He’s very forgiving,” Osmeña said.

The mayor posted on his Facebook page last March 12 copies of documents from the DOJ, signed by Aguirre, directing the Cebu City Prosecutor’s Office to inhibit and cease from conducting the preliminary investigation of the cases filed against the Sy Group of Companies.

Aguirre defended his action and insisted that his directive to transfer the preliminary investigation of the complaint from Cebu to the DOJ in Manila was well within his authority.

“As a matter of fact, I am exercising it almost always,” he said, adding that his decision was prompted by a complaint from SM that the local prosecutors were “partial in favor” of Osmeña. /with reports from Ador Vincent S. Mayol