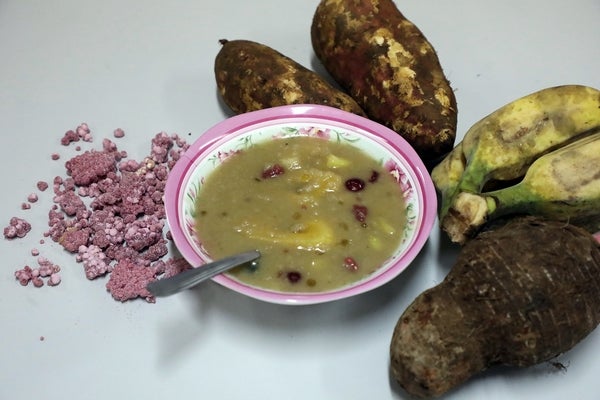 In binignit, the addition of landang to thicken the sauce is what makes the dish uniquely Cebuano.
CDN PHOTO/TONEE DESPOJO

We are a people deeply absorbed in Catholic traditions — processions, fiestas and Semana Santa or Holy Week.

Mention Holy Week and visions of biko, bibingka and binignit float into the Cebuanos’ collective memory.

Semana Santa is a week-long commemoration of the passion, death and resurrection of Jesus Christ.

The days leading to Good Friday are a testament to the Cebuanos’ adherence to meatless meals.

How they go around this self-inflicted sacrifice is also a testament to their resourcefulness in creating fantastic dishes without meat.

In the old days, no one made unnecessary noise after Palm Sunday. The days were spent in prayer and visits to the church.

While all this was going on, home kitchens were busy with mothers, aunts and grandmothers cooking ’painit’ (a light informal meal or snack) dishes.
Many families eat only one full meal on Good Friday but fill in the rest of the time with bibingka, biko and binignit.

Good Friday is the most challenging time for mothers to come up with something substantial to feed the whole family.

In Cebu, there is an abundance of coconuts so it is easy to concoct a dish that will have a variety of ingredients thrown together in a coconut milk broth.

Thus we have binignit!

In Luzon, this is called guinatan, short for guinata-an or that which has coconut milk.

The word, binignit, is quite intriguing as one cannot find its root word as most complex Cebuano words are wont to have. But when we say binignit we know what it is.

The dish is composed of root crops like gabi ( taro) and camote ( sweet potato), a variety of cooking banana called saba or cardaba, and landang.

The last ingredient speaks of a distant past when a tree saved Cebuanos from ‘tag-gutom’ or famine when crops could not grow because of drought or a terrible man-made catastrophe like a world war.

Landang is made from the buli tree which dies after it flowers.

When this happens, people in remote villages would chop down the tree to extract the carbohydrate from its trunk in a laborious process of cutting the trunk into smaller pieces, then into thinner strips which are dried, then pounded, and sieved twice.

Indeed, people then must have had nothing to eat for them to go through this tedious process of food gathering.

In binignit, the addition of landang to thicken the sauce is what makes the dish uniquely Cebuano.

In other places, the choice of thickener is bilo-bilo or rice balls. But Cebuanos like their binignit with landang.