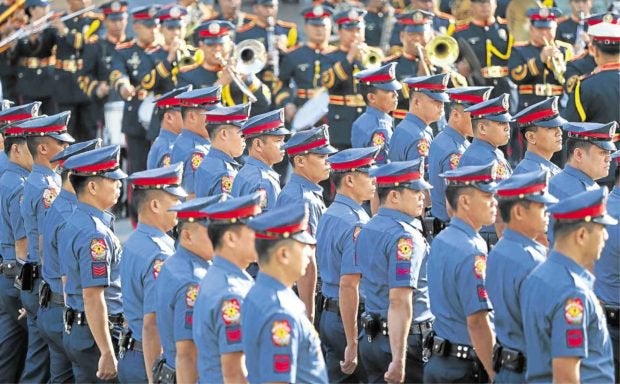 UNIFIED FORCE The adoption of military ranks for policemen is expected to “promote a common understanding” with the AFP. / Inquirer.net

Bringing back the old rank classification of the Philippine National Police, making it the same as that of the Armed Forces of the Philippines, will stop the confusion between the two groups, according to the Metro Manila police chief.

This was the reason cited by Director Oscar Albayalde, National Capital Region Police Office chief, for his support for House Bill No. 5236 which was approved on second reading on March 25.

“We [have been] asking Congress for a long time to [bring] back our old ranks,” Albayalde said recently. “Up until now, people are still confused [about] what police ranks mean.”

On the other hand, police officers who introduced themselves as inspectors (a 1st or 2nd lieutenant in the military) were believed to be bus inspectors.

According to Albayalde, President Rodrigo Duterte has also expressed support for the return of the old police ranks.

Under House Bill 5236 authored by Antipolo Rep. Romeo Acop, the ranks of PNP commissioned and noncommissioned officers would be modified to follow that of their military counterpart but with the word “police” before these.

Acop, a former police official, said in his bill that “despite the usage of [the new police ranks], the public seems to have been accustomed to the use of rank classification using military terminologies.”

The adoption of military ranks for policemen would “promote a common understanding between and among members of the AFP and PNP, and enhance their efficiency in interagency operations,” he added.

Acop’s bill seeks to amend Section 28 of Republic Act No. 6975, or the law establishing the PNP under a reorganized Department of the Interior and Local Government.

Under Sections 28 and 29 of RA 6975, the PNP adopted a different structure of rank classifications “for purposes of attaining a more efficient administration, supervision, and control.”