Cebuanos welcome back the relics of St. Therese 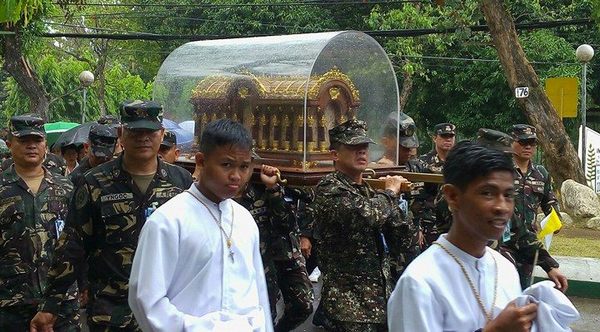 The relics of St. Therese of the Child Jesus are carried by the military as it arrived at the Armed Forces of the Philippines’ Central Command in Cebu City.

The relics of Saint Therese of the Child Jesus are back in Cebu.

Escorted by the military, the sacred remains of the Carmelite nun dropped by the National Shrine of St. Joseph in Mandaue City before they were brought to the Armed Forces of the Philippines’ Central Command headquarters inside Camp Lapu-Lapu in Barangay Lahug, Cebu City on Tuesday morning, a day after it arrived at the Benito Ebuen Air Base on Mactan Island.

Cebu Auxiliary Bishop Oscar Jaime Florencio, also the apostolic administrator of the Military Ordinariate, presided over the Mass to welcome the relics, which are bone fragments of the beloved saint housed in a special reliquary.

In his homily, Florencio urged the faithful to emulate St. Therese’ “little way” or doing ordinary things extraordinarily for God.

“The relics of St. Therese speak to us. She loved the Lord and showed it, not only by becoming a Carmelite nun and an obedient daughter, but by her life. She suffered with the Lord. She found a connection with the Lord through pain and sacrifice,” he said.

“Her coming today is an invitation for us to have an intimate relationship with Jesus. May we become true children of the Father,” he added.

Florencio, who on Tuesday celebrated his 28th anniversary as priest, offered prayers for priests and military men, among others, as they serve the people and God.

The relics of St. Therese from Lisieux, France will be transferred to the Archdiocesan Shrine of St. Therese in Barangay Lahug at 6 a.m. today before they will be brought to the Bureau of Jail Management and Penology in the hilly village of Kalunasan, Cebu City.

At noon today, the relics will be transferred to the Carmelite Monastery in Barangay Mabolo where it will stay overnight. Cebu Archbishop Jose Palma will preside over a Mass at 2:30 p.m.

On Thursday, the relics will be brought to the Police Regional Office in Central Visayas (PRO-7) at 1 p.m. to be followed by a procession from the police headquarters to the Cebu Metropolitan Cathedral at 8 p.m.

At 11 p.m. of the same day, the bone fragments of the saint will be brought back to the Carmelite Monastery where it will stay until Saturday.

The relics will be transferred to the Naval Command in Lapu-Lapu City at 6 a.m. on Saturday before it will be shipped to Bohol.

The relics visited different dioceses and archdioceses in Luzon before they went to the Visayas region. The relics will subsequently visit different churches in Mindanao before they will be brought back to France in May 2018.

This is the fourth time the pilgrim relics of St. Therese visited the Philippines. The first three visits were done in 2000, 2008, and 2012.

Born on Jan. 2, 1873, St. Therese of Lisieux has been popularly known as the “Little Flower of Jesus.”

As a Carmelite nun, St. Therese performed little acts of charity and sacrifices, not caring how unimportant they seemed.

St. Therese is only the third woman to be proclaimed after St. Catherine of Siena and Saint Teresa of Avila.