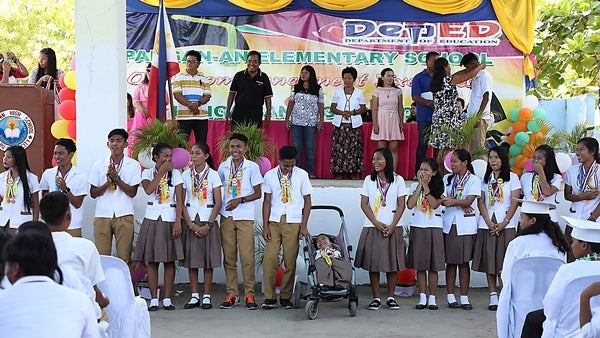 Jean Laurence Balingit, 17, (center, in stroller), shows that a genetic disorder is not a hindrance to getting an education. Above, Balingit takes time for a photo opportunity with her classmates, during their graduation from Junior High School on Wednesday in Pangan-an High School, Barangay Pangan-an Island in Lapu-Lapu City.
(CDN PHOTO/TONEE DESPOJO

The story is one for the books — that of an extraordinary feat by two sisters suffering from Osteogenesis Imperfecta, a genetic disorder characterized by bones that break easily.

In Caohagan islet, Lapu-Lapu City, 17-year-old Jean Balingit and her 12-year old sister, Alejah could not sit up nor stand due their medical condition.
But the sisters were among the proud graduates yesterday after struggling , day in and out for years, to physically make it to school.

Jean, who was diagnosed with the disease when she was two years old, started going to school at 7.

From then on, her father and mother took turns in bringing her to class on her stroller.

Inside the classroom, Jean lay on a table specially made for her, as she learned to read and write.

Her hard work paid off as she successfully graduated from grade school, years back.

For highschool, Jean’s parents sent her to neighboring Pangan-an island, some three kilometers away by boat from Caohagan, as there were no secondary schools on their islet.

So that Jean would not have to ride a boat from Caohagan toPangan-an daily, her mother Emma, a midwife rented a room for her on the island.

She would be home in Caohagan on weekends. Jean’s classmate Juvelyn Vender, 16, a Pangan-an resident, offered to assist Jean by pushing her stroller daily to school.

For four years, this was Jean and Juvelyn’s daily routine until they both graduated from Junior High yesterday.

“Bisan og ingon ani ko pero wala gyud ko gibati og kakapoy, gani determinado ko nga makahuman og kurso pagka abogada (Even with my condition, I never felt tired. In fact, I am determined to become a lawyer),” said Jean explaining that she dreams of being able to help people who do not have the means to hire a lawyer when in need of legal services.

They plan to rent a room in mainland Lapu-Lapu City so that Jean can continue with her senior high school education together with her friend, Juvelyn.

Jean graduated with an award as 3rd placer of the Nutri Quiz. She was also awarded for good conduct and perfect attendance.

Upon hearing of the sisters’ accomplishments, Lapu-Lapu City Mayor Paz Radaza paid a visit to the island.

Jean and Alejah were each rewarded with an Android phone to help them with their studies by doing research online and even contacting friends on Facebook.

“We will do our best to put up a senior high school here as it is really difficult and expensive to travel to the mainland as most of them here are poor,” said Ronez in Cebuano.

Pangan-an’s school principal Marilou Pasilan said, despite the island’s poverty, where people were mostly fisherfolk, Pangan-an has managed to produce a lawyer, engineers and other professionals by the students’ sheer determination.

Pangan-an island is located at the southernmost tip of Olango Island. It can be reached through a 45-minute boat ride from Hilton wharf on Lapu-Lapu’s mainland.

Read Next
Traffic caused by infra a ‘temporary sacrifice’