WWII veterans recognized for their heroism 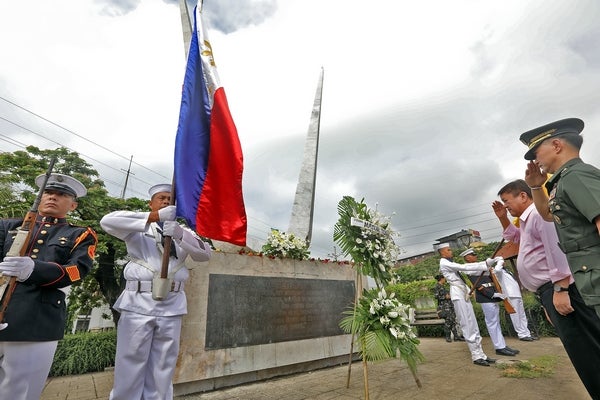 Fifteen veterans were recognized by the Cebu City Government for supporting Cebuano troops during World War II, during the commemoration of the 76th Araw ng Kagitingan yesterday at the Plaza Independencia.

Cebu City Mayor Tomas Osmeña, Vice Mayor Edgar Labella, and Councilors Margarita Osmeña, Sisinio Andales, Renato Osmeña Jr., Joel Garganera, and Pastor Alcover Jr., were on hand to award the certificate of recognition to soldier veterans, former members of the Japanese resistance in Cebu (guerillas), and those who supported their fight against the Japanese invaders.

In his speech, Osmeña extended his gratitude to the veterans who fought for the country, and Cebu particularly, more than 70 years ago.

“We commemorate the sacrifices made by our forefathers, and we are here to help you,” said Osmeña.

However, the mayor later revealed that at this point, the Cebu City government may not be able to provide financial assistance to war veterans.

“Not at this point. You can always give financial assistance to everybody but that’s not the way the city operates. We are already running P800 million a year on all kinds of financial assistance but what we’re giving right now is even more than the richer cities,” Osmeña said.

The celebration of National Heroes Day was also highlighted during the book launching of Tabunan, authored by Dr. Erlinda Alburo and Dr. Resil

Mojares, which chronicles the daily lives of Cebuano guerillas during the invasion of Japanese forces.

At the age of 99, Ruperto Mayuga is the oldest recipient of the Certificate of Recognition. Mayuga, who now resides in Barangay Punta Princesa, Cebu City, was a former WWII soldier serving on the frontlines.

On the other hand, 96-year-old Manuela Rosa Labella, who was also among the war veterans recognized during yesterday’s ceremony, recalled the days when she had to discreetly purchase supplies such as food and blankets to support Cebuano guerillas in the war.

“Magmata gyud ko sayo sa buntag para mangompra. Unya naa ra mi kauban para mupahibawo namo kung dunay Hapon sa palibut (I wake up early in the morning to buy supplies. We had a member who would warn us if there were Japanese soldiers nearby),” said Labella.

She was grateful for the recognition given to her, saying it was a testament that their efforts during the war are still being remembered now.