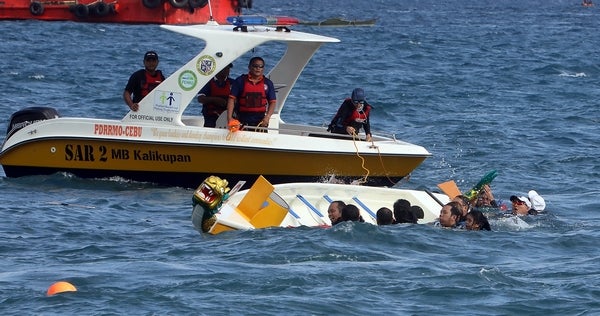 The paddlers from Poseidon Dragons wait to be rescued by the Coast Guard after their dragon boat capsized during the 2nd Cebu Dragon Boat Fiesta in the City of Naga, south Cebu.
CDN PHOTO/TONEE DESPOJO

PADS-A won the Mixed Cebu division while the Poseidon Dragons topped the Open Cebu Category in what is considered as a controversial decision by their opponent, the PADS B.

The PADS B had won the first heat with a time of 1:28.2 while the Poseidon Dragons were declared the winner in the second heat after clocking 1:27.33. The Dragons was the only team who had an official time after figuring in a collision with Team BakuNaga.

However, organizers decided to forego the finals round due to the choppy conditions of the sea, and proposed to decide the winner based on the times during the heats.

PADS B insisted on racing in the finals while the Poseidon Dragons decided to no longer race.

The PADS B decided to race even without an opponent but as they were preparing, one of its paddlers fell off the boat, disqualifying the team and prompting the organizers to declare the Poseidon Dragons as the winners.

“It’s very unfair nga ganina nga wala nakuha ang time (namo). Wa nila gi-DQ (sila), wa silay gihatag nga penalty sa uban.” (It’s very unfair that they were not able to get our time earlier. They did not disqualify them, they did not give any penalty to the others.)

For his part, Dragons team Manager Paul Ouano, who is more concerned for his teammates’ safety, kept mum on the matter.

“They (PADS) are disappointed I bet. You have to take the decisions of the jury as they weighed everything. They were given a chance to do a re-run earlier, but they fell. That was their chance. They asked for another chance. What will the Poseidon people feel? We try to be fair,” said Su.

Meanwhile, Su said that the standard and small boat 500m races will start early today to “beat the choppy waters.”