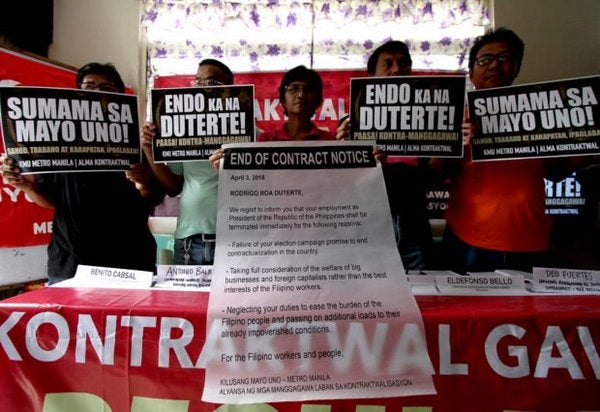 Labor leaders are hopeful that President Rodrigo Duterte will sign on Monday an executive order (EO) that will regulate contractualization and make the direct hiring of employees the norm.

A day after submitting their new draft EO against contractualization to Labor Secretary Silvestre Bello III, representatives of the labor groups on Saturday urged the President to approve their recommendations, which they said would boost the protection of workers’ rights.

An official of Nagkaisa Labor Coalition (NLC) said the President received a copy of its three-page draft, the product of the coalition’s eight hours of deliberations on Friday with Bello and other labor officials.

“(The draft EO) will undo decades of injustice to millions of contractualized and ‘endo’ workers enslaved in poverty by contractualization work schemes,” said Michael Mendoza, chair of the NLC and national president of the Associated Labor Unions-Trade Union Congress of the Philippines (ALU-TUCP), in a statement.

Malacañang has said that totally outlawing endo, which is short for “end of contract,” is not possible at this time. But the Duterte administration is amenable to regulating contractualization, according to presidential spokesperson Harry Roque.