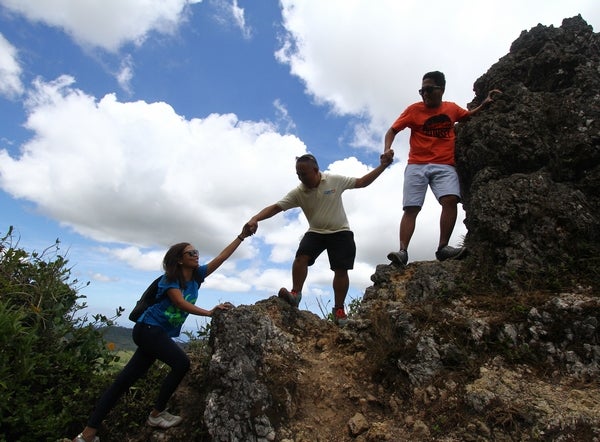 Joselito “Boboi” Costas, Provincial Tourism Office head of Cebu Province, said this as he called on officials of Badian town and Dalaguete town to provide security and ensure the safety of tourists visiting the Osmena Peak, a tourism destination in southern Cebu located in Badian town and at the border of Dalaguete town.

Costas made the call amid an accident involving a tourist from Hong Kong, who was injured after she fell off the peak on Saturday.

Alice Queblatin, Cebu Association of Tour Operation Specialists (Catos) president, also suggested that hazard areas and accident-prone areas should be cordoned off and proper signages should be placed and be visible along the route of the hike to the peak.

“And a First Aid Station should be set up in the mountains for quick response to accidents,” Queblatin said.

She also encouraged that local guides should be required to accompany tourists visiting the Osmena Peak.

“Tourists on a DIY (Do it yourself) itinerary are those who frequent Osmeña Peak. A local guide is a must who should advise guests on do’s and dont’s, dangers of the site, etc.,” she said.

CATOS members are the ones who provide tours and packages for tourists coming into Cebu.

Queblatin said their members also include Osmeña Peak in their soft adventure packages.

And these packages, she said, include a trained local guide.

Aside from that, Queblatin also suggested that First Aid Stations be set up in the area.

“And a First Aid Station should be set up in the mountains for quick response to accidents,” Queblatin said.

Arine Monterona, PTO’s environment and monitoring coordinator, said that the 35-year-old tourist from Hong Kong, Lau Tin Yan, who survived a 20-foot fall from Osmena Peak, was in stable condition at the hospital after undergoing a successful surgery on her pelvic area.

Lau was rushed to the hospital last Saturday noon after her fall.

Monterona said that they had coordinated with the Chinese Consulate in Cebu and were informed that the family of Lau was already informed about the accident.

He said that Lau’s mother is expected to arrive in Cebu today.

Lau, a saleswoman in Hong Kong, is expected to be discharged from the hospital on Wednesday, said Monterona.

Meanwhile, Mantalongon Barangay Captain Josephine Nepomuceno of Dalaguete said that they could not put up safety structures in the famous peak because the area is under the jurisdiction of Badian town specifically in Barangay Patong of that town.

She said it is the municipality of Dalaguete who maintained the place as most of the tourists expressed their complaints to the neighboring barangay, which is in barangay Mantalongon.

“Ang mga turista ari moreklamo sa Mantalongon. Ang mahitabo dunay mga risgo kay kami may moresponde kay kami man ang pinakaduol nga lugar,” Nepomuceno said.
(Tourists complain to us. So if there are some emergencies, we are the ones who respond because of our location).

Complaints such as garbage are being addressed by the local officials in Dalaguete town, Nepomuceno said.

“Sa unang panahon walay taga Badian molimpyo didto. Unya ang mga turista moadto didto kay moreklamo nga daghan kaayo og basura, walay nag maintain, walay mo guide nila ari moreklamo namo,” she said.
(Before, there were no personnel from Badian who are assigned to maintain the place. Tourists would come to us and complain about garbage and no local guides for them).

Cebu Daily News tried to reach Badian Tourism Office, but they could not be reached for comment.

Nepomuceno said tourists prefer to take a shortcut going to Osmeña Peak in Barangay Patong, by passing through the borders in Mantalongon.

She said it would take at least four hours to reach the popular mountain if tourists would pass through Badian going to barangay Patong due to its remote location and undeveloped road.

She added that at least 18 hired community based guides inDalaguete town, to assist hikers with directions to their trek.

Aside from that, an environmental fee of at least P30 is asked by the locals in Dalaguete to tourists upon their entry, said Nepomuceno.

Mantalongon Tourism Officer Jelyn Elemino said around 160 to 200 was the average number of visitors during regular days and could be reached to at least 1,000 visitors during weekends and holidays.