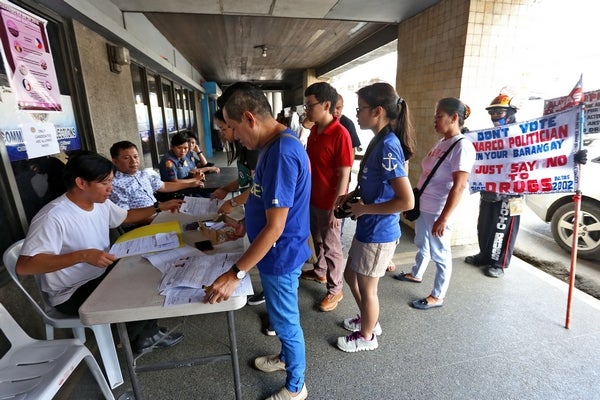 Candidates for the Barangay and SK elections file their Certificates of Candidacy (COCs) at the Cebu City Comelec office. CDN PHOTO/JUNJIE MENDOZA

The Commision on Elections has extended the filing of Certificates of Candidacy for the Barangay and Sangguniang Kabataan (SK) polls until 5:00 p.m. today, April 21.

In a resolution, Comelec extended the period after the National Youth Commission (NYC) expressed its concern that the number of candidates for SK positions may be insufficient to fill up the 338,584 available slots.

Comelec Provincial Election Supervisor lawyer Lionel Marco Castillano said that this extension is a fair luck to those who were not able to make the cut off yesterday.

“There was an SK line up from Camotes nga niabot almost 5 p.m. unya sayop ang ilang form. They haven’t filed kay kung mag-fill out silag balik sa form kay maabtan na silag past 5 p.m., so wa gyod sila ka-file,” said Castillano.
(An SK line up from Camotes arrived at almost 5 p.m. and they did not fill up the correct forms. They did not file their Certificates of Candidacy because it would take them past 5 p.m. to fill out the correct ones.)

Castillano said some candidates also arrived at their respective Comelec offices at past 5 p.m.

“Maayo ra sad ni para naa pa to sila’y chance. At least tomorrow, maka-file pa sila,” Castillano said. (The extension will give them another chance to file their candidacies.)

Castillano is confident that they would make the 38,000 target number of candidates for the Barangay and SK elections (BSKE).

He said that Comelec only checks the accuracy of the documents submitted for the COC.

It cannot investigate into whether or not the candidate is related to an incumbent official up to the second degree of consanguinity or affinity.

If a candidate who violates the anti-dynasty provision of the SK law, is elected, Castillano said that a quo warranto case must then be filed before the court to remove him from office. /With Marthy John Lubiano PIT Intern