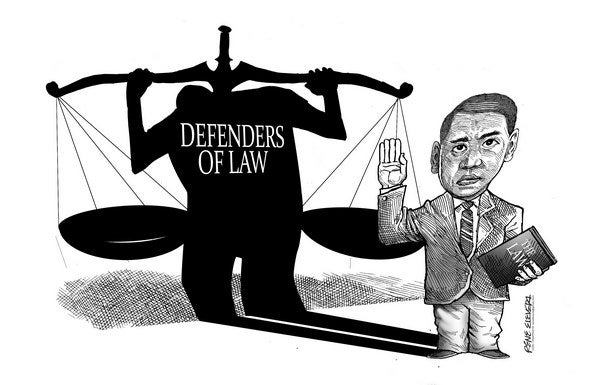 At a time when the Philippine judiciary – in the words of former Chief Magistrate Hilario Davide Jr. – is suffering Calvary many times over, the words of the Cebu topnotchers in the 2017 bar examinations bring some comfort.

“We’re taught not just excellence in academics, but also good virtues. We’re not only taught how to be an intelligent lawyer, but also how to be morally fit,” said Christiane Mae Balili of the University of San Carlos.

“I think what I can do to improve the status of the profession is just to be a good lawyer,” said Balili, who garnered second highest score among those who passed the bar.

Her fellow Carolinian, bar seventh placer Rheland Servacio was as wise in word.

Their profession, he said, “should not just be lawyering for our interest or for the interest of our clients. It should be for the improvement of the entire judicial and legal system.”

Time will tell if the Carolinians and every other lawyer in their batch will walk the talk as we hope they will.

But what is certain is that the nation is in dire need of ethical lawyers who possess, foremost, the courage to uphold the Constitution and our democratic values.

The bar nowadays faces the daunting challenge of the highest office of the land being occupied by one of their own who is to our grief impatient with due process and unmindful of the implications of his murderous rants on the workings of those who wield arms, legitimately or otherwise.

The situation is compounded by his ring of like-minded pañeros who have turned the law into a scourge of dissenters.

It is of no help that the justices of the Supreme Court have compromised the judiciary’s own independence by giving in to the infantilism of their rivalries.

Without going into the merits of the impeachment complaint or the quo warranto case against Chief Justice Maria Lourdes P.A. Sereno, many are convinced that by testifying in the Lower House against their colleague on matters within the competence of the High Court and then entertaining a question on the Chief Justice’s fitness for office years after the prescriptive period for questioning, the Court has made the waters of legality murky.

The crisis in the legal profession is afflicting not only its upper echelons, for it was set off by one Lorenzo Gadon, a lawyer who was shown – going against the very oath he took at the House Justice Committee – to have no personal knowledge of his claims against Sereno.

For our new lawyers, we wish them all the virtue that will keep them off Gadon’s course, for in opposition to the idealism of those who still remember the joy and triumph of passing the bar, and impervious the disbarment complaints he faces, he has said, “I don’t care if I am disbarred. I will still eat delicious food and live comfortably. I don’t depend on income from lawyering alone.”