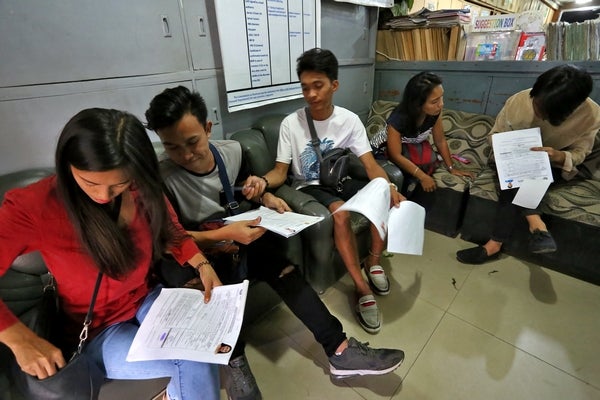 SK candidates of barangay Bonbon, Cebu City file their Certificates of Candidacy (COCs) at the Commission on Elections (Comelec) office in this CDN file photo.

At least 267 barangay and Sangguniang Kabataan (SK) candidates are now on the disqualification list after the Commission on Elections (Comelec) found some discrepancies in their Certificates of Candidacy (COCs).

However, they are still considered as candidates for the May 14 polls until the Comelec en banc decides for disqualification against them, said Comelec Provincial Election Supervisor Lawyer Lionel Marco Castillano.

Castillano added that the matter would usually be resolved after the election.

He added that the Comelec central office instructed them to gather data that would support the conduct of a motu proprio or a decision acted by the Comelec without the need for a petition to disqualify the candidates.

Most of the delisted candidates who were running for SK positions failed to meet the age requirement.

Of the 267 candidates ordered for disqualification in the province, 171 of them are beyond 24 years old while 34 are below 18.

Aside from that, at least 46 candidates were unregistered voters while 16 are in deactivated status.

Meanwhile, a training and refresher seminar for Election Officers (EOs) will be done today, May 1.

The EOs will then echo what they learned in the seminar to the members of the Electoral Board (EB) in their respective municipalities.

The training will include an introduction to the general instructions in the conduct of the election and a refresher course on ballot appreciation.

Gujilde said that the the training aims to empower the EB and to reiterate that they have the highest authority inside the polling places.

He said that while poll watchers or candidates may raise a protest, the EB has full authority to decide on the concerns raised.

If the watchers or candidates are not satisfied with the decision of the EB, further protests may only be filed at the Comelec after the proclamation of winners.

Gujilde added that since the Barangay and SK elections will be done manually, the EB needs to be reminded on the rules in interpreting the contents of the ballots.

Gujilde reminded that under the rules in appraising a ballot, the spelling of the names of the candidate would not matter as long it can be read similarly to the name of the candidate.

“The concept there is that if a voter cannot even write his own name correctly, we cannot assume that he will be able to write the name of the candidate well,” said Gujilde.