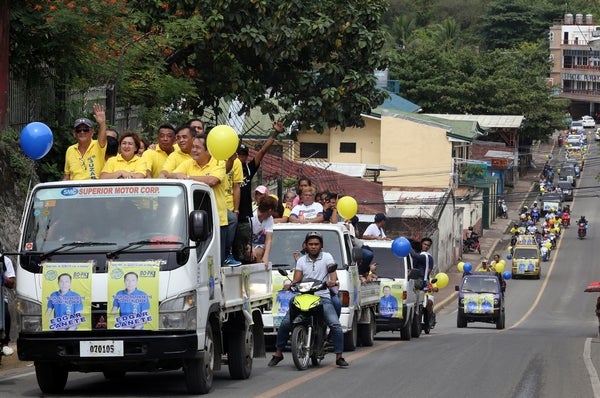 CAMPAIGN SEASON. Barangay election bets and their supporters start their campaign with a motorcade and handshaking in Barangay Guadalupe, Cebu City on Sunday, May 6, 2017.

The Commission on Elections (Comelec) in Cebu province has affirmed the recommendation of the Cebu Provincial Police Office (CPPO) to place six barangays in Tuburan under the Election Watchlist Areas (EWAs) due to history of electoral violence in these barangays.

Castillano said that only the barangays of Putat, Carmelo, Mag-atubang, Sumon, Monte Alegre and Gaang in Tuburan will be placed under the EWAs for the May 14 Barangay and SK election unless incidents of election-related violence will transpire in other areas prior to their final security briefing on May 8.

Castillano also affirmed that the towns of Bogo, Daanbantayan, Medellin, and Tabogon, which were previously identified as areas of concern or possible hotspots, were now cleared since there was no justification to place them under the watchlist.

Definite augmentation of troops from the Philippine National Police (PNP) and the Armed Forces of the Philippines (AFP) will be put in place in the barangays under the EWAs to ensure the safety of voters during the elections, said Castillano.

Senior Supt. Edgar Alan Okubo, CPPO director, said that security plans are already in place, as they have anticipated the problems that could arise
during the elections, especially in barangays under the EWAs.

Okubo added that they have also requested augmentation forces from CCPO, MCPO and AFP to ensure that there would be enough personnel deployed in the province, especially in the Tuburan barangays that are under the EWAs.

He said that the AFP Task Force Cebu have already committed to provide one Quick Reaction Team for each congressional district in the province, as well as separate teams for each of the island-towns in the province.

Senior Supt. Joel Doria, the CCPO director, meanwhile, revealed that around 500 policemen from Cebu City would be sent to the provincial police and would be deployed in towns and cities as augmentation force during the elections.

With assistance from other police units and the AFP, Okubo assured that they have enough personnel to deploy in the 51 component cities and municipalities of the province.

“Any problems na mag (may) arise, we have prepared tactical plans to solve that.

If anything arises, the PNP and AFP will be there to respond and solve it,” Okubo told Cebu Daily News in a phone interview.

According to Okubo, there could be concerns that they would have to address on election day.

These would include possible confrontations that could erupt between members of partisan groups, particularly during the counting of votes; and power outages at the voting precincts.

“Anything is possible, “ said Okubo, even as he stressed that with the presence of the augmentation forces, they would likely be able to put a lid on any election-related disturbance.

Supt. Milbert Glade Esguerra, the police chief of Tuburan, likewise assured that preventive measures were being prepared to help ensure that no violent incident could erupt in the EWAs in his town.

Esguerra said he had met with some of the towns’ candidates for the barangay election, including those in the villages under EWA, and most attended the peace covenant signing held in the municipality on the last week of April.

“I urged them (candidates) to maintain the peace and order situation. I hope that we will abide by the rules. They should always be role models — a peacemaker not a peace breaker,” Esguerra said.

On the other hand, more checkpoints will also be set up in the EWAs to make sure that the gun ban is enforced and to prevent any incident of violence from happening, said Okubo.

The PNP in Camp Crame, in a statement Sunday, said they recorded 21 deaths in 16 probable incidents of election-related violence nationwide since the start of the election period on April 14. None of these incidents however happened in Cebu.

Castillano said that the absence of election-related violence in Cebu so far could be attributed to the proactive operations of the PNP and the AFP in watchlist areas in Tuburan.

“They ordered for the surrender of loose firearms, those that were not registered. Our armed forces are also patrolling the mountain areas of Tuburan regularly. That is one reason why no incident was recorded so far,” said Castillano.

Meanwhile, Cebu Provincial Association of Barangay Councils (ABC) President and Board Member Celestino Martinez III urged the captains of barangays under EWA to ensure the safety of their voters as they cast their votes on May 14.

He said the incumbent barangay officials should see to it that the people would not be afraid to cast their votes during the election because of the impending threats of violence.