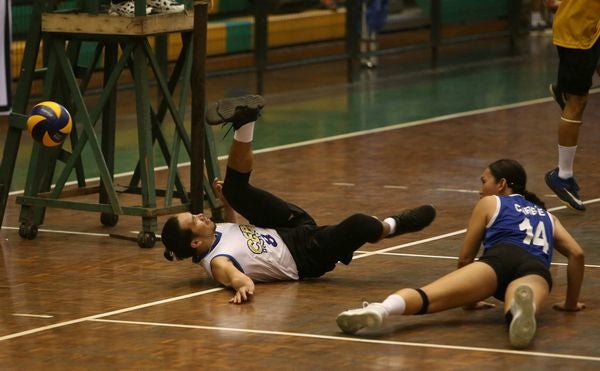 Ariel Carumba of the Cebu Province team falls to the ground after trying to save the ball in a semifinal game against the University of San Carlos at the USC gym. CDN PHOTO/LITO TECSON

Chemistry will be the main concern for the Cebu Province when they take on the Southwestern University (SWU)- Phinma iConnect in the men’s division finals of the Cebu City Mayor’s Cup Open Volleyball Tournament today at the University of San Carlos (USC) gym.

According to Cebu Province Head Coach Grace Antigua, the team will have to be more cohesive if it wants to get past a well bonded SWU team.

“SWU will be very difficult for us. They have been together for a long time. That is where we are at a disadvantage,” Antigua, a multi-titled coach who once mentored USJ-R, said. “We need just a little bit more of communication and blending in this team.”

Cebu Province’s Ariel Carumba, who led the team’s victory yesterday and a former USJ-R Jaguar, agreed with Antigua’s view, saying the team will need more communication to get past the young SWU squad.

He said it was lack of communication that cost them the first set yesterday against USC.

“That is why we lost the first set. We lacked communication and we lacked practice,” he said, citing that the lack of practice was because of the recent barangay elections and the jobs that some of his teammates have to take care of.

But the 29-year-old Carumba remains positive going into the finals, especially since he is enjoying every minute on the court and playing alongside current and former Cesafi players.

“It feels really good to play volleyball again,” said Carumba, who last played competitive volleyball in 2009. “I was surprised when coach Grace invited me to play for Cebu Province. I did not hesitate to accept the invitation because it was she who molded me to what I have become as an athlete.”

In the women’s division, vying for the title will be the Cebu Spikers Volleyball Club (CSVC) and USC Warriors.

The championship games will be played at the same venue this afternoon right after the battle-for-third games in the morning.