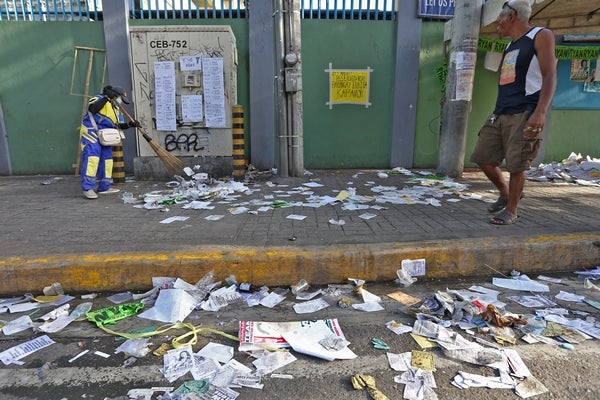 These are among the tons of garbage collected in Cebu City streets after the elections. CDN PHOTO/JUNJIE MENDOZA

Ten tons of trash, made up of campaign materials such as paper, posters, fliers, and tarpaulins, were collected by the Cebu City government’s Department of Public Service (DPS) personnel a day after the Barangay and Sangguniang Kabataan (SK) elections on Monday.

DPS chief, Roberto Cabarrubias, said in press briefing on Tuesday that they deployed all their 100 personnel to clean the streets of Cebu City and collect garbage especially around schools used as polling places.

Cabarrubias said they collected the most trash from areas where a single school would have to accommodate voters from two barangays at one time such as in N. Bacalso Ave. and Osmeña Blvd. where Abellana National School and the Cebu City Central School are located.