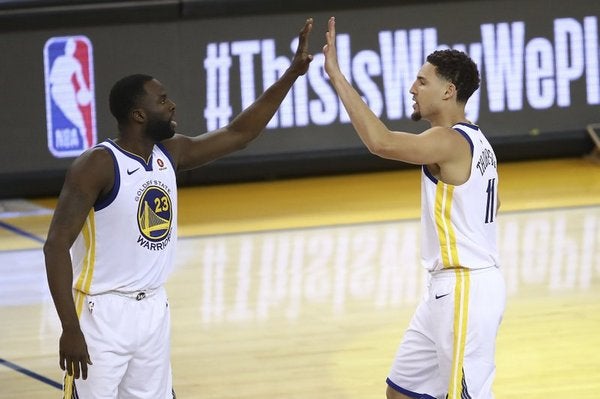 Oakland, California — An awful start followed by three quarters of utter dominance, spot-on shot-making and beautiful defense — even against one of the game’s greatest and hardest to stop in James Harden. That’s the way it’s been for these up-and-down, uber-talented Warriors, who leave even their coach perplexed.

“I have no clue why our team is like this,” Steve Kerr said. “It’s kind of what we do.”

They can still do it all the way to a fourth straight NBA Finals.

Klay Thompson knocked down nine 3-pointers on the way to 35 points, the Warriors held Harden down in the second half, and Golden State rallied from an early 17-point deficit to stave off elimination with a 115-86 victory over the Houston Rockets on Saturday night to force a deciding Game 7 in the Western Conference finals.

“I guess you could say I was born for it. Man, that felt good,” Thompson said.

Kevin Durant struggled with his stroke at 6 for 17 but still scored 23 points as the defending champions kept their repeat quest alive by thoroughly outplaying Houston in the second half. The Warriors outscored the Rockets 55-20 in the second half before both coaches subbed their key players with 4:28 left.

A dynamic, star-studded series projected to be as captivating and compelling as the actual NBA Finals is going the distance. Game 7 is Monday night back in Houston.

“We just didn’t want to go out like that,” Thompson said, “we wanted to force Game 7 so badly.”

Golden State stymied Harden on consecutive possessions early in the fourth with smothering defense led by Nick Young and several helpers, then Thompson hit a 3-pointer from the left wing at 9:40 for an 89-77 lead.

And roaring Oracle Arena went crazy with hopes of even more home games to come if Golden State can get to a fourth straight finals.