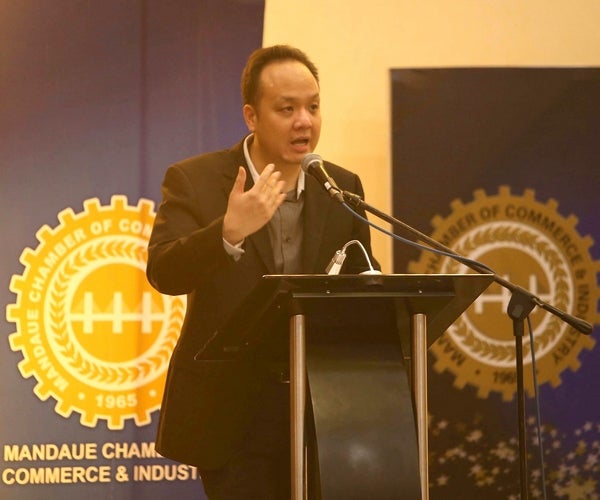 Stanley Go, Mandaue Chamber of Commerce and Industry president,outlines the business group’s thrust and projects for the year during Friday’s (MAY 25) general membership meeting at the City Sports Club.

The Mandaue Chamber of Commerce and Industry (MCCI) continues to expand its membership, aiming to close the year at 400 members.

During the MCCI general membership meeting last week, 33 more member companies were inaugurated by the chamber.

Stanley Go, MCCI president, said that they already have 365 members.

“We have given ourselves a self-imposed challenge to grow the MCCI membership to more than 400 by the end of the year,” Go said.

“But even as we are busy growing the chamber, we do not forget the community we are in,” he added.

Go, who only assumed as president last January, reported that the MCCI had also embarked on several activities starting this year.

For one, they have revitalized the monthly Mandaue Talks with Business (MTB) where they have dialogues with officials of the Mandaue City Government led by Mayor Luigi Quisumbing.

They would discuss and resolve issues on policies affecting business. The city government would also present their plans and where business could provide support.

An average of between 30 to 50 companies have been attending the MTB which is hosted by different industries every month.

The MCCI has also sponsored several seminars with their members this year including topics on cyber security and the data privacy law, risk management and business sustainability and a digital marketing bootcamp.

A seminar on accounting for business owners will be held.

The Men in Business (MIB) is also on its second season. It is MCCI’s community program where they help men between the ages of 40 to 55 in coming up with their own business ventures.

These men include those who don’t have work, have retired, and are heads of their respective families.

The MCCI has also been helping local government units organize their own chambers of commerce and industry including Minglanilla which already formed one.

Liloan has also requested the MCCI to provide them with orientation and training on this, according to Go.

The MCCI will also be having its Mandaue Business Month (MBM) on August.

In November, the MCCI will be joining a Cebu delegation to the upcoming China International Import Expo (CIIE).

Go said they will send a delegation that would be part of a group organized by the Department of Trade and Industry (DTI) and its export promotion arm CITEM (Center for International Trade Expositions and Missions) on Nov. 5 to 10.