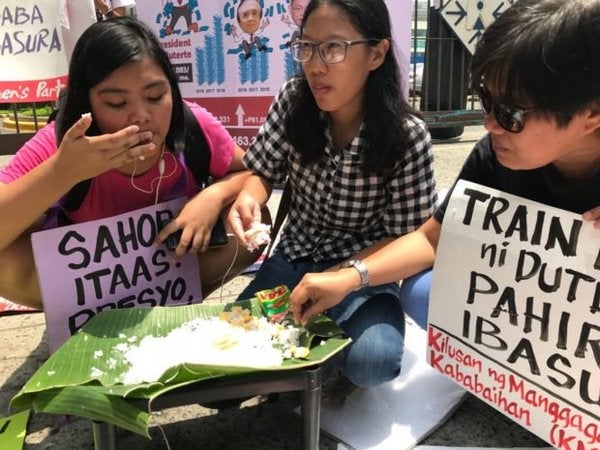 Pro-women’s group Gabriela staged a “tambay boodle lunch” in front of the National Economic Development Authority (Neda) office in Pasig City on Friday to protest against the economic managers’ alleged efforts to downplay the effects of inflation on poor families.

Members and supporters of the party-list group ate “chichirya” or cheap junk food as viand for rice, depicting the Neda estimate of P25 as an expense for food per person per day.

But Socioeconomic Planning Secretary Ernesto M. Pernia had said in a statement that Neda never said anything like that, explaining that an erroneous television report spurred hate against the agency which supposedly claimed that P10,000 is enough to sustain the needs of a family of five for a month.

“I understand and regret that there are those who were dismayed by the budget figures presented in a press conference last June 5. Allow me to point out that there was no mention of a decent budget for a family,” Pernia said.

The protesters also took a swipe at the new anti-crime drive of the Philippine National Police (PNP) against loiterers or “tambays.”

“Samantalang itong mga tambay sa opisina ng Neda, pinapasweldo ng halos P200,000 kada buwan para lang ipagkait ang dagdag sahod na hinihingi ng mga manggagawa,” she added.
(The tambays caught by the police, they are jobless or affected by ‘endo’ who make the most of their little money to avoid hunger. However, these bystanders inside the office of Neda are given P200,000 to prevent the salary increase for the workers.)

The group also reiterated its proposal to the government regarding the establishment of a P750 per day national minimum wage.

Read Next
DOH rolls out nationwide Hepa B testing