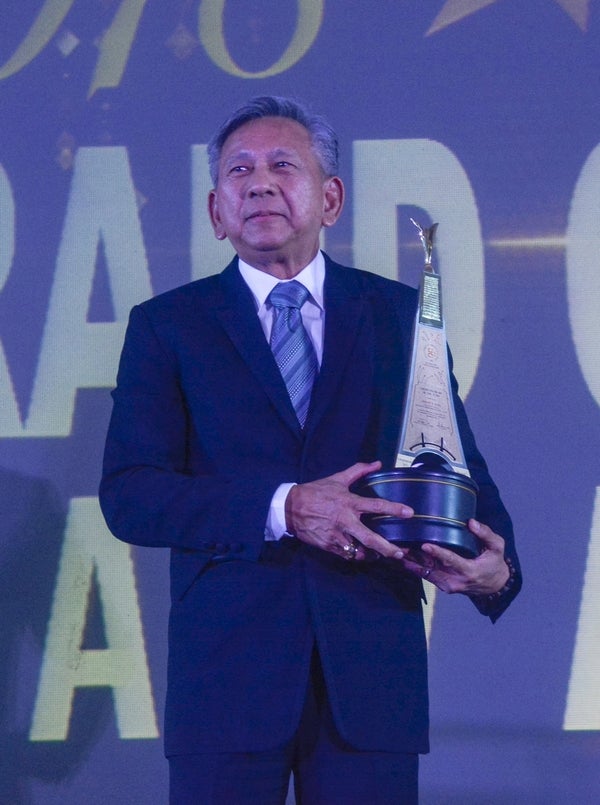 Mario A. King, president and CEO of Nito’s International Ventures Inc., is this year’s Cebu Chamber of Commerce and Industry’s Entrepreneur of the Year awardee.

CCCI’s Entrepreneur of the Year shares his story of success

There’s a need to cultivate the value of gratitude among family corporations to sustain them.

Mario King of Nito’s International Ventures Inc. (NIVI), who has 40 years of experience running different businesses in the family, said this as he emphasized the value of gratitude in sustaining family corporations.

King, 63, pointed out that most of the small and medium enterprises in the country are family-run.

The more successful ones, he said, are already in their “vintage years” where succession from the first generation to the second and even the third generations are already happening.

But he said that statistics showed that among the family corporations in the country, only a small percentage had been able to graduate to the second and third generations.

“There are problems that can arise from the mingling of business ownership and family relationship. I found out that there’s one value or one virtue that would, in a way, help us solve these problems. It is the value of gratitude,” said King.

“From my experience, I see that gratitude, as a virtue, needs to be deliberately deepened, enhanced, and embraced. Because when you are grateful, you would see everything as a gift. Material things will become as they are – ephemeral, transient,” he said.

King, 63, had one more thing to be grateful for as he was recognized as the Entrepreneur of the Year by the Cebu Chamber of Commerce and Industry (CCCI).

He led six other awardees of different categories during the Grand Chamber Awards and Fellowship Night last Friday at the Oakridge Pavilion – the culminating activity of the month-long 2018 Cebu Business Month (CBM) celebration.

These three companies form a triumvirate wherein NIVI provides the capital and structure of the company, SKYGO which is a local motorcycle brand, and the Sto. Nino de Cebu Finance Corp. which caters to car financing, personal loans, appliance financing, and group financing.

The youngest of five siblings, King was very much exposed to their family’s different businesses even as a child.

His father, the late Juanito King has founded a diverse group of companies run by Mario and his siblings which eventually cemented the family name “King” as a reputable brand in Cebu.

One of the family’s first ventures is the Nito’s Auto Supply, one of the only two auto supply stores in Cebu in 1964. With Mario at the helm, Nito’s has expanded its operations and diversified into new product lines such as reconditioned trucks, construction and industrial equipment.

King said after he graduated from BS Management at the Ateneo de Manila University, he went on a vacation in La Union and pondered on his future – whether to return to Cebu and join the family business or not.

His sense of gratitude to his parents for sending him to prestigious and expensive schools pushed him to return to Cebu.

But in order to carve a name for himself, King decided to put up NIVI in 2000 wherein the third generation of the King family had also started to get into.

Out of his six children, only one is currently involved in the business, his second to the youngest son David. But he said his other children had recently agreed to be part of the business as shareholders.

Mario and his wife Haydee have also entered the real estate industry through J. Nitton Development Corp. – a company dedicated to their youngest son Joseph Nitton who has special needs.

Considered a social enterprise, the company has been focused on constructing socialized housing projects to help poor families get access to a house and lot with a price cap of P450,000.

“Haydee and I formed this social enterprise to go primarily into socialized housing because nobody likes to get into that because there’s no money there. We decided that this is the thing we want to do for the rest of our lives,” he said.

The developer is currently constructing 640 units of socialized housing in an over 4-hectare area Carcar City. Turnover over of the project’s first phase is scheduled this month.

They are also about to start another socialized housing projects in a 2.5-hectare lot in Bogo City which will accommodate 350 houses.

The Entrepreneur of the Year is the most coveted of the Grand Chamber Awards.

“Our awardees serve as role models for aspiring entrepreneurs. We salute them for their passion for their work and what they believe in,” CCCI President Antonio Chiu said in his speech.

Fe Barino, vice president for admin and finance of Duros Development Corp. was awarded as Most Inspiring Woman Entrepreneur of the Year – a new award given by the CCCI only this year.