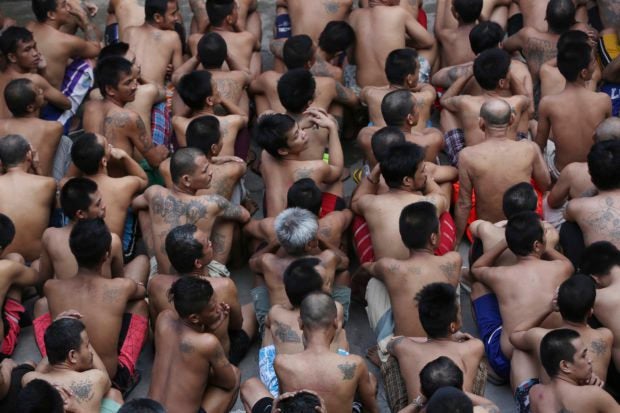 TOO MANY INMATES A 2017 report of the Commission on Audit showed that jails nationwide, including this Quezon City facility, had a total cell population of 146,302, or seven times greater than the ideal capacity of 20,653. —NIÑO JESUS ORBETA

Overcrowding in the country’s jails — housing suspects who have not even been convicted yet — got worse last year, as the Duterte administration waged its war on illegal drugs.

The Commission on Audit (COA) said the jail congestion rate reached 612 percent last year — worse than the 511 percent logged at the end of 2016.

Cell capacity is computed according to the ideal standards set by the BJMP in its Manual on Habitat, Water, Sanitation and Kitchen in Jails.

Set as ideal floor area per inmate is 4.7 square meters, and the maximum number of inmates in one cell should be 10.

Overcrowding in the past two years had been at least twice as bad compared to 11 years ago, the COA said.

Its annual reports for 2008 to 2015 did not take note of congestion nationwide.

The COA cited the “number of drug-related cases in the country” as one of the reasons for the ballooning detainee population. It didn’t provide figures, though