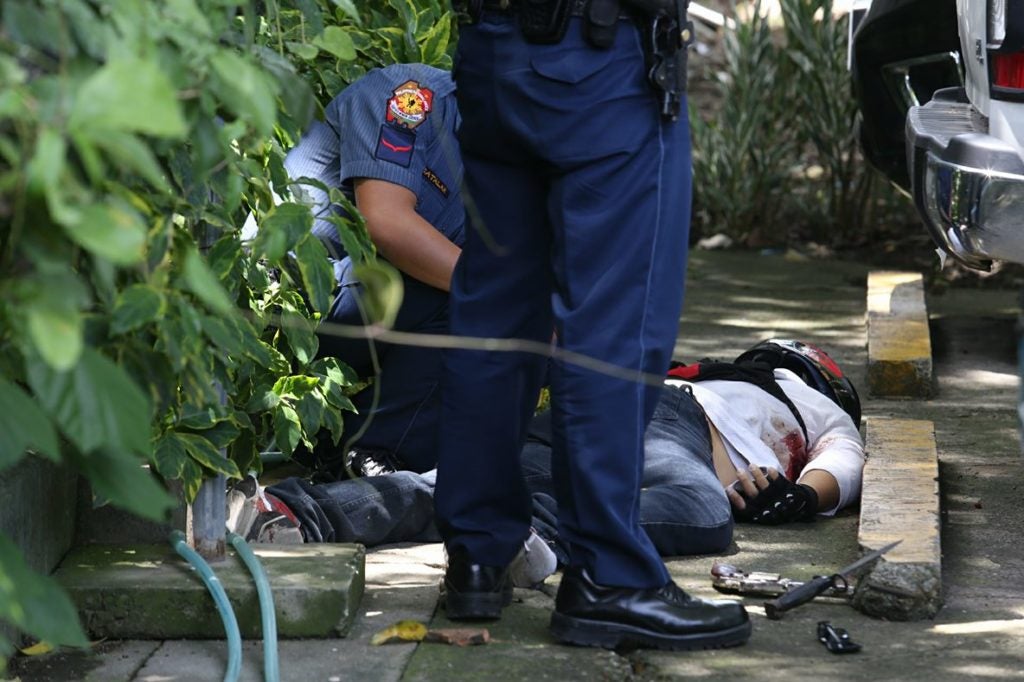 A man who was looking for Cebu Archbishop Jose Palma was gunned down by police operatives in what appeared to be a shootout inside the Archbishop’s Residence compound along D. Jakosalem Street in Cebu City past 11 a.m. on Tuesday.

PO1 Shiela Mae Estrero of the Mobile Patrol Group said they received a call from employees of the Archbishop’s Residence regarding an armed man on board a motorcycle who went inside the home of Cebu’s archbishop.

“When we arrived in the area, the man was on board his motorcycle. Our operatives tried to approach him, but he said ‘Ayaw ko ninyo hilabti. (Don’t touch me)’ before he fired at us,” Estrero said in an interview.

“Left without a choice, we returned fire and hit him,” she added.

The man was identified as Jefrey Cañedo, 41, and a resident of Barangay Labangon, Cebu City based on his driver’s license.

Cañedo was wearing a face mask and a helmet when he entered the compound of the Archbishop’s Residence at 10:40 a.m.

Asked briefly by the guards what was his purpose and who he wanted to meet at the Archbishop’s Residence, the man replied “Si Bishop Palma” before he sped off on board his motorcycle.

Chief Supt. Debold Sinas, director of the Police Regional Office in Central Visayas (PRO-7), said Cañedo talked to employees of the Archbishop’s Residence at the parking lot but was informed that the archbishop is still in Manila.

“The man appeared to be disturbed because he wasn’t clear on what he was saying. One of the secretaries of the archbishop noticed what seemed to be a firearm tucked on the man’s waist, prompting him to call the police,” he said.

Cañedo reportedly engaged the operatives in a shootout.

Msgr. Joseph Tan, media liaison officer of the Archdiocese of Cebu, said Cañedo’s dead body was blessed by Villarojo before it was brought to the morgue.

LIVE: Interview with Msgr. Joseph Tan on the shooting incident inside the Archbishop's residence | Nestle Semilla

“We’re hoping this is an isolated case,” he said.

Palma, the chief shepherd of the country’s biggest archdiocese, flew to Manila last week to attend the 117th Plenary Assembly of the Catholic Bishops’ Conference of the Philippines (CBCP) from July 7 to 9, 2018.

Palma, a former president of the CBCP, has openly denounced the spate of killings in the country.
In an interview with the Inquirer last June 26, the 68-year-old prelate urged the people to pray for President Rodrigo Duterte following the latter’s rant about God and the Catholic Church.

In its Pastoral Exhortation released on Monday, the CBCP have offered peace, joy, and forgiveness amid so much hatred and violence in the country.

“Our enemies in this world are not fellow human beings, not ‘flesh and blood’ (Eph 6:12). We do not fight our battles with guns and bullets. We do not seek protection from those who might wish to harm us by wearing bullet-proof vests, because the battles that we fight are spiritual,” said the statement signed by Davao Archbishop Romulo Valles, the president of the CBCP.

“In these times of darkness, when there’s so much hatred and violence, when murder has become an almost daily occurrence, when people have gotten so used to exchanging insults and hurting words in the social media, we admonish the faithful to remain steadfast in our common vocation and mission to actively work for peace,” he added.

Valles said priests being murdered for witnessing to Christ, maligned and ridiculed because they have carried out their duties as shepherds is nothing new in the history of the Church.

“Have you forgotten that the blood of martyrs is the seed of Christians? It is what has kept the Church alive after two thousand years. Did not our master say, “Do not be afraid of those who kill the body but cannot kill the soul. Rather be afraid of the one who can destroy both body and soul into Gehenna” (Mt 10:28)?,” he said.

“What does the Lord tell his disciples when they are persecuted or humiliated for his sake? He tells them to “rejoice and be glad” (Mt 5:12),” he added.

On July 16, the feast of the Our Lady of Mt. Carmel, Valles urged the entire nation to spend a day of prayer and penance invoking God’s mercy and justice on “those who have blasphemed God’s Holy Name, those who slander and bear false witness, and those who commit murder or justify murder as a means for fighting criminality in our country.”