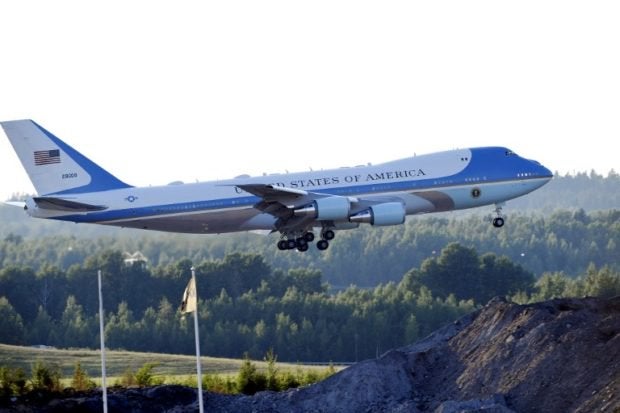 The Air Force One carrying US President Donald Trump and US First Lady Melania Trump arrives at the Helsinki-Vantaa Airport in Helsinki, on July 15, 2018, on the eve of a summit between the US President and his Russian counterpart.
AFP

WASHINGTON, United States – Air Force One’s iconic blue and white color scheme may be on the way out.

US President Donald Trump has announced plans to repaint the next model of the presidential aircraft.

“Red, white and blue,” Trump told CBS News of his plan to have the next version emblazoned with the colors of the American flag.

“Air Force One is going to be incredible,” Trump said in the interview with CBS, which took place over the weekend and was aired on Tuesday.

US aircraft manufacturer Boeing is to supply the next presidential jetliner, which won’t take to the skies for several years.

“Boeing gave us a good deal,” Trump told CBS. “And we were able to take that.”

“But I said, ‘I wonder if we should use the same baby blue colors?’ and we’re not.”

Air Force One has featured the blue-and-white color scheme since the administration of president John F. Kennedy.