3 dies after building collapses into another in Indian village 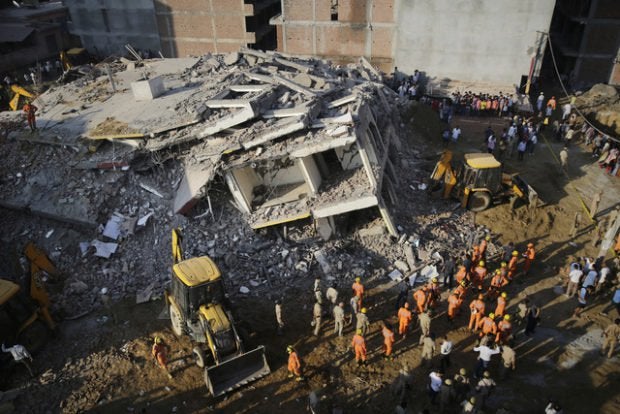 Rescuers work at the site of a collapsed building in Shahberi village, east of New Delhi, India, Wednesday.
/AP

NEW DELHI — A six-story building under construction collapsed onto an adjacent building east of the Indian capital, killing at least three people and trapping several others under the debris, police said Wednesday.

Chief Fire Officer Arun Kumar Singh said at least 12 workers were in the building at the time and are feared trapped under rubble, the Press Trust of India news agency reported.

The second building also collapsed under the impact of the first building that fell Tuesday night, he said.

The four-story building was two years old and only one family lived there, district magistrate B.N. Singh said. One security guard and some workers on the ground floor may have been inside at the time as well.

More than 100 rescuers with cranes, sledgehammers and chainsaws worked through the night to remove the debris in Shahberi village, nearly 40 kilometers (25 miles) east of New Delhi, said Krishan Kumar, a rescue agency official.

Drills were being used to remove metal rods to reach those trapped. A dog squad was at the site smelling for signs of life.

The owner of the building, which was under construction, and his two associates have been detained for questioning, Sharma said. The cause of the building collapse was not immediately known.

The National Disaster Response Force, a federal rescue agency, was helping police in the search and rescue operations. Ravinder Singh, a NDRF official, said it would take several hours to clear the debris.

Angry residents complained the two buildings collapsed around 8:30 p.m. Tuesday but the police and fire services reached the site an hour and a half later. The rescue effort was slow to begin with, resident Praveen Srivastava told the New Delhi Television news channel.