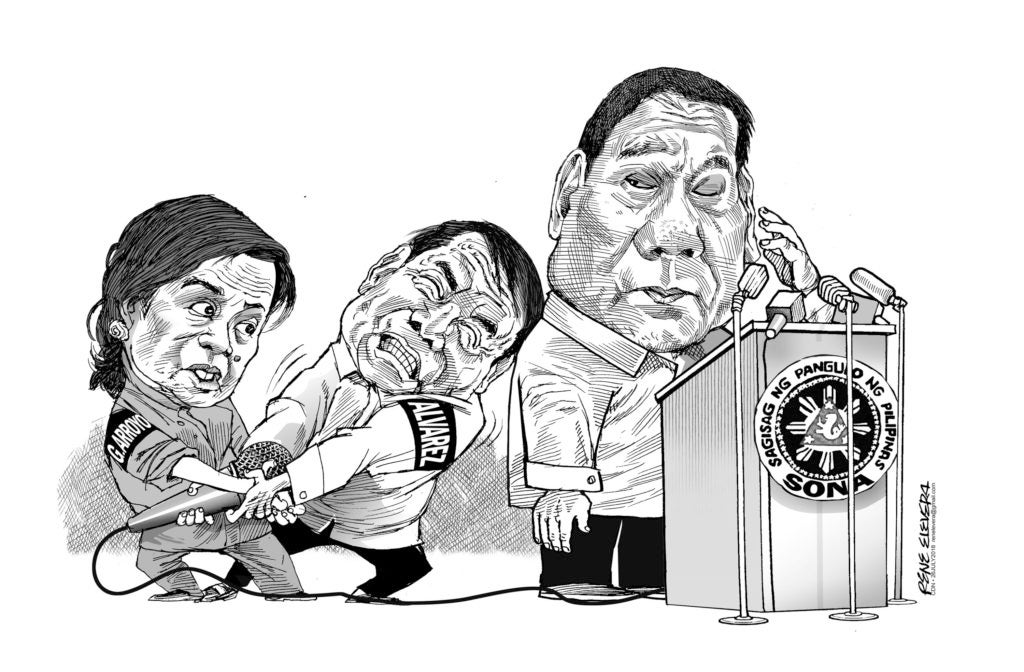 But this week won’t pass without mainstream media joining in the national discourse over what President Duterte said in his address, his third message to the Filipinos in his second year of office (his third if one includes his inaugural address upon assuming the presidency in 2016).

Simply put, the President’s address last Monday was an updated retread (if there is such a thing) of last year’s SONA. Whether that’s a good or bad thing depends on one’s perspective.

Chief in his address is his administration’s relentless campaign against illegal drugs and his taking aim at human rights advocates protesting the growing casualty count by labeling his war as protecting human life.

“If you think that I can be dissuaded from continuing this fight because of [your] demonstrations, your protests, which I find, by the way, misdirected, then you got it all wrong. Your concern is human rights, mine is human lives,” President Duterte said to applause from the House gallery.

While Mr. Duterte’s “human life over human rights” statement may earn him political points, not a few like Caloocan Bishop Pablo Virgilio David would point out that the President doesn’t consider “victims of drug-related killings are not human lives” and that the “right to life is the most basic of human rights.”

As debate over the government’s “chilling” war on drugs continue, there are a lot of issues to pick on in the president’s address, including such programs as Phase 2 of the Train law which would grant lower corporate income tax and terms of reference for a third player in the country’s telecom industry.

The President also reiterated among other issues his administration’s commitment to protect the environment through the rehabilitation of Boracay Island, policies to mandate accountability from mining firms in the extraction of the country’s mineral resources and the creation of a Department of Disaster Management.

That President Duterte’s SONA was remarkably free of cuss words and harangues against known political enemies—then again, his most ardent critics are either in jail, out of a job or mostly sidelined—had some people describing his address as almost statesmanlike, a sad reflection of how much we have lowered expectations for the incumbent government.

Yet regardless how verbose and well produced the President’s address is, the bottomline remains that the proof of the pudding is in the eating. And so again, we monitor how the administration will perform in the coming months and years.