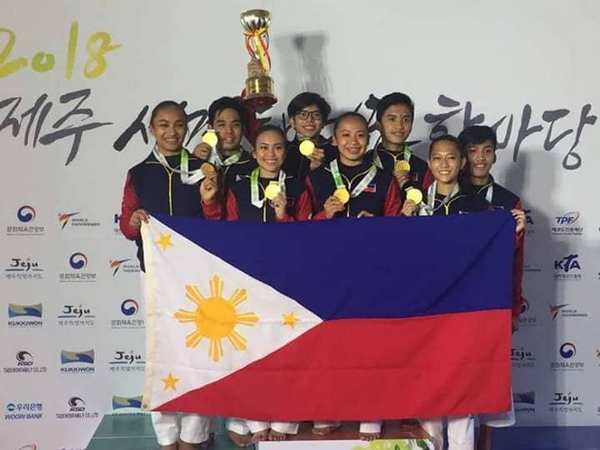 The Philippine Taekwondo team at the 2018 Jeju World Taekwondo Hanmadang.

Taekwondo is known as a martial art with sparring as its main highlight during competitions.

But in the 2018 Jeju World Taekwondo Hanmadang, a new competition sprouted with the idea of combining the poomsae forms of taekwondo with dancing. It is called taekwondance.

And out of all strong nations who participated, it was the poomsae powerhouse Philippine Taekwondo Team which displayed its utmost brilliance in the new taekwondo competition.

Led by two promising Cebuanos Lyan Llanto of the University of the Philippines and McAvengr Alob of De La Salle University, the six-man Philippine Team won the gold medal in the taekwondance competition of the annual tikefest held in Jeju Island, South Korea over the weekend.

The World Taekwondo Hanmadang is a festival which shows the essentials of the martial art like poomsae and the victory meant a lot for the taekwondo community and is now considered to be a path for Filipino, particularly Cebuano, jins to excel at.

“It’s a whole different world (the World Taekwondo Hanmadang) where teams compete in all facets of taekwondo outside sparring,” Philippine Taekwondo Association Region 7 chairman Tony del Prado said. “There is also breaking, freestyle, and the taekwondance which I think is the most prestigious event.”

“Considering that Cebu has two representatives in the team, this is definitely a boost to our development.” Del Prado added, “It is our thrust to encourage more coaches to focus in poomsae.”

Cebu has been making noise in the poomsae competition recently.

In the National Poomsae Championship, Cebu sent three teams with three different coaches in the tournament from sending just one coach in the past editions of the competition.

It is also another milestone for both Cebuanos as this is Alob and Llanto’s second gold in the competition.