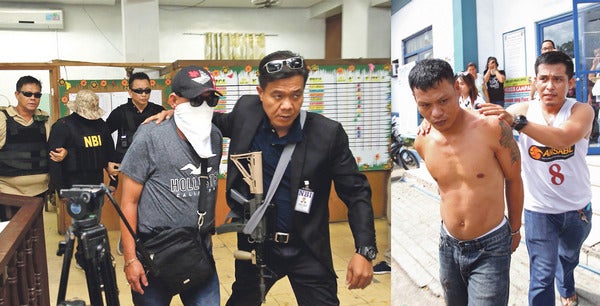 NBI agents secure former Tejero Barangay Captain now Councilor Jessielou Cadungog and his driver (covering their faces) as they arrive at the Cebu City Prosecutor’s Office for the filing of a case against Michael Banua (right photo). Banua was the driver of the motorcycle which PO3 Eugene Alcain Calumba used during the alleged botched ambush of Cadungog on Monday.

The National Bureau of Investigation in Central Visayas (NBI-7) has filed homicide charges against the bodyguard of Tejero Barangay Councilor Jessielou Cadungog for the death of PO3 Eugene Calumba.

The complaint stemmed from the extrajudicial statement of William Macaslang, admitting that he shot dead the policeman.

But Macaslang claimed that the shooting was done in self-defense, according to NBI-7 Director Patricio Bernales.

“According to him (Macaslang), he saw PO2 Calumba pulled a handgun from his waistband, prompting him to get his gun and shoot Calumba to protect himself,” Bernales explained.

With Macaslang’s confession, Bernales said the NBI-7 was left with no choice but to file a case against the bodyguard.

“He shot somebody who eventually died. That’s why we filed this case,” he said.

But the NBI-7 had not filed any case against Michael Banua who drove the motorcycle boarded by Calumba in the alleged foiled ambush.

Banua was accosted by the barangay tanods but was later taken into custody by the Criminal Investigation and Detection Group in Central Visayas (CIDG-7).

Bernales said they had yet to gather enough evidence against Banua.

Supt. Reyman Tolentin, information officer of the Police Regional Office in Central Visayas (PRO-7), said the police would also be filing a case against Macaslang and Cadungog.

“Most probably, it’s going to be murder,” he said.

Chief Supt. Debold Sinas, director of the PRO-7, earlier said Calumba, a member of the Drug Enforcement Unit of the Parian Police Station, was conducting surveillance operations with Banua in Tejero when Macaslang suddenly shot the policeman.

While Tejero was under the jurisdiction of Waterfront Police Station, Sinas said the area where Calumba was shot was in the boundary and part of Parian Police Station.

But after the shooting, Banua was first brought to the Waterfront Police Station before the CIDG-7 took custody of him as “witness” in the shooting.

Both Cadungog and Macaslang were also brought to the Waterfront Police Station on Tuesday where they were booked after CIDG-7 conducted a “constructive arrest” — a term used when a law enforcement agency effected an arrest on suspects who were already in custody of another law enforcement agency.

The arrest was part of the procedure for the filing of murder charges against the two, said Tolentin.

Despite the “constructive arrest,” Cadungog and Macaslang remain under the custody of the NBI-7 where they sought shelter after the killing of Calumba.

Clad in bulletproof vest and a face mask, Macaslang was escorted by NBI-7 agents to the Cebu City Prosecutor’s Office past noon on Tuesday for the inquest proceedings.
Cebu City Assistant Prosecutor Ma. Theresa Casiño was expected to issue a resolution today whether or not to elevate the charges against Macaslang to the Regional Trial Court.

Homicide is a bailable offense.

While the inquest proceedings was going on, CIDG-7 operatives conducted a “constructive arrest” against Cadungog and Macaslang prior to the filing of murder charges against them.

Although Cadungog was not in the vehicle when the shooting happened, he owned the caliber .357 Snub-nose revolver used by Macaslang in killing Calumba.

Senior Insp. Joemar Pomarejos, chief of the Waterfront Police Station, said they had witnesses who claimed that Cadungog was inside the vehicle with Macaslang when Calumba was killed.

“We have witnesses who said that Macaslang and Cadungog were inside the vehicle and that they both have firearms,” he said.

The Trade Union Congress of the Philippines (TUCP) stood by Cadungog, vice chair of the Oriental Port and Allied Services Corporation (OPASCOR) and one of the directors of Associated Labor Union (ALU) national board.

In a statement, TUCP president Raymond Mendoza assailed the police’s excuse as a “sordid attempt to justify and cover-up” the police’s involvement on the attempt on life of the labor leader who helped organize port workers in the province.

“Who will protect us now against lawlessness and the breakdown of the rule of law now that the police themselves who are supposed to protect the people are the ones who are killing and hurting us? Where do the weak and powerless go and seek for protection?” Mendoza said.

The PRO-7 also planned to file charges of obstruction of justice and physical injuries against Cebu City Councilor Dave Tumulak for allegedly punching Banua and for taking hold of some pieces of evidence at the crime scene.

Tumulak has repeatedly denied the allegations, saying he was the one who saved Banua from angry bystanders and brought him to the hospital for medical treatment.

While he admitted he had the identification cards of Banua, Tumulak said these were given to him by the nurse while the man was being treated.

He said he wanted to turn over Banua’s things to the police but no one wanted to get them.

He eventually gave them to Cebu City Mayor Tomas Osmeña who turned them over to the NBI.

Osmeña slammed the decision of the CIDG-7 and PRO-7 to file complaints against Tumulak.

“That’s pure bull****. They can’t withstand scrutiny. Let the CIDG file, and make them a fool of themselves. This is a form of harassment,” he said in a press conference on Tuesday.

“The police should be grateful to me because if I wasn’t there, Banua would have been 100 percent dead now because he was about to be mauled by bystanders in T. Padilla. And which part did I actually ‘obstruct justice’?” he said.

Tumulak’s lawyer, Amando Virgil Ligutan, said the plan to file charges against the councilor was “absurd.”

He said there was a possibility that the NBI would file charges against Banua for allegedly trying to kill Cadungog.

“It was a day of confusion. We’re confused because the victims of an ambush attempt are now being persecuted and the deputy mayor for police matters who just responded to the area or the crime scene is about to face charges for obstruction of justice,” Ligutan said.

Tolentin assured the public that they would be conducting an impartial investigation on the matter.

He also denied insinuations that Calumba was a hitman.

“And if you say that he’s a hitman, he could no longer defend himself. Dead man tells no tales as they say,” said Tolentin.

“He is one of us. That is one I would like to tell to the public. And we are mourning (because) of his loss. If you say anything hitman or whatever, we will not believe that for the moment,” he added. /with reports from Nestle L. Semilla, Morexette Marie B. Erram and Jovic Yee